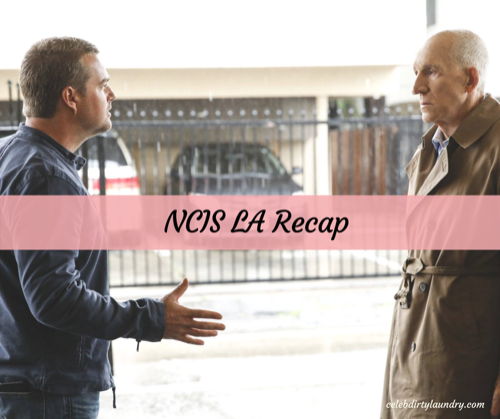 Tonight on CBS NCIS: Los Angeles returns with an all new Sunday, February 19, 2017, season 8 episode 16 called, “Old Tricks” and we have your weekly NCIS: Los Angeles recap below. On tonight’s NCIS Los Angeles episode, as per the CBS synopsis, “After a retirement home resident is kidnapped, the NCIS team uncover a pair of con artists: Ginger  (Debra Jo Rupp) and Edward O’Boyle, (Martin Mull )who hop from home to home scamming the elderly out of their money. Meanwhile, Callen (Chris O’Donnell) confronts his father on his illegal activity and the danger it places on their family.”

NCIS: LA begins tonight with an elderly man, Louis Miller (John Coulton) is kidnapped from a retirement home. Kensi Blye (Daniela Ruah) meets with Nate Getz (Peter Cambor), explains what has happened recently and asks if he could just tell her if she could go back to work. He says after everything he heard none of them should be back to work. He says it sounds like she has been back to work for a while and approves her return.

Nell Jones (Renee Felice Smith) shares with G. Callen (Chris O’Donnell), Sam Hanna (LL Cool J) and Eric Beale (Barrett Foa) the kidnapping from the home, and they can’t find Louis Miller nor his grandson, Warren Miller (Connor Weil), a lieutenant in the Navy; as they update the team, they locate the missing ambulance.

Callen and Sam arrive at the ambulance, and find Lt. Warren Miller barely alive; as they call for an ambulance, they realize the irony. Callen hot wires the ambulance as Sam injects him long enough to keep him alive; they are all happy to see that Kensi is back behind her desk and cleared for duty.

Marty Deeks (Eric Christian Olsen) is interviewing the 2 paramedics that were attacked and left unconscious; after their uniforms and ambulance. They realize that since Warren was left behind, its probably not about him.

Nell shares that the grandfather, Master Sargeant Louis Miller, comes from a family of long military history. Hetty Lange (Linda Hunt) says he is now their case and they need to find him.

After she welcomes Kensi back, she is sent to go undercover in the retirement home with Deeks. Sam is to meet a secret service agent in the boat shed because it seems they are interested in Louis Miller in one of their investigations. Callen is told to follow her as they have another matter to attend to.

Callen asks about Owen Granger (the late Miguel Ferrer), but Hetty says he isn’t the issue; he thinks it is about Joelle (Elizabeth Bogush), but Hetty says she doesn’t want to talk about that bitch. She wants to talk about his half-sister Alexanda Reynolds (India de Beaufort) and the father of her child, Pacey Smith (Mike Erwin).

Callen is surprised that they are tracking his father who has been caught twice in the vicinity of them and promises to take care of it. Hetty warns him to not make a temporary solution a permanent mistake.

Meanwhile, Deeks meets with a resident in the home, while Kensi pretends to be looking for a home for her grandmother; wanting to check out their security. Deeks gets him to race his wheelchair throughout the hallways, leaving Kensi in the security room, who patches everything over to Nell.

Callen takes a gun away from his grandfather and demands to know if this has to do with Pacey Smith. He tells him in America they believe in second chances, and that is why he is there because America and Callen are giving him a second chance.

He asks his grandfather to simply stay away from Pacey Smith for him; but it appears too late since Pacey is in the trunk. Callen is furious because Pacey is the father of his grandson; he says he is a drug dealer and prison has not changed him.

Sam goes to the boat shed and meets NCIS Agent Thompson (Jeronimo Spinx) and SSSA Nicole Dechamps (Marsha Thomason) who reveals that the kidnapped vet may have kept an illegal coin that is worth well over 7 million dollars. Secret Service has been tracking the coins for years and found that one of the men who may have stolen one was Jackson Miller, Louis’ grandfather.

Sam says its possible the Secret Service is the one who started this chain of events and Louis couldn’t have done this, leaving his grandson within an inch of his life. Dechamps says she has visited Louis a few times in the home but the last visit there was an elderly man outside his room, eavesdropping. She didn’t catch a name but she can do a photo lineup.

Nell sends Deeks a photo of Edward O’Boyle (Martin Mull) and he has him in his sight. Deeks manages to get himself involved in a highstakes, under the table card game.

Nate comes to see Eric and Nell, where they both admit she is doing a great job; when they get some weird intel of Edward, Nate is glued to the screen and photos and names. Eric tells him Kensi will be back later, then asks Nell if Nate is weird sometimes.

Deeks proves to the table that Edward is cheating and reveals he is not there visiting his uncle. Ginger (Debra Jo Rupp) tries to run away while Eddie smashes Deeks over the head; as Deeks and Eddie fight for the cane, Ginger attempts to escape again.

Callen and his grandfather continue to deal with Pacey, and when he doesn’t answer they figure out that Pacey isn’t a drug dealer nor criminal but in fact as criminal informant for LAPD.

Deeks and Kensi learn that Eddie and Ginger have been doing this repeatedly in different retirement homes, to get the elderly to sign their wills over to them. They question them about the coin Louis, and inform them he is missing.

Eddie says they have it all wrong; he knew about the double eagle coin but weren’t interested in it because they couldn’t sell it. Malcolm who works at the home can sell things on the dark web, but according to Edward he hadn’t found a buyer for it yet. Deeks informs them they were conned.

Sam and DeChamps are on their way to the warehouse of the man who once owned the coin but lost it in an auction several years earlier. Nell and Eric say they haven’t heard from Callen but Hetty assures them there is no need to worry. Pacey is with the police, happy to be out of the informant business.

He is furious that he stepped over the line for him,; and he either has to be a father or not, no more of this watching from a distance. Callen says it isn’t working, whoa re they protecting with the secrets and lies.

Sam tells Dechamps they are on this mission together, as they watch an army of people leave the warehouse but Louis wasn’t with them. She finds him, but they are ambushed. They thrown Louis’ oxygen tank in the air and shot to make it explode. Sam grabs one of the men and demands answers.

Louis is safe, and when Kensi and Deeks tell Edward and Ginger that, they say send police units to the bus, not the home; especially since Malcolm believes Edward still has the double eagle. Eric and Nell find the bus being followed, they surround the bus and heavily armed men exit towards the bus. Hetty calls for back up but Sam and Dechamps are there as well. Dechamps asks what he is waiting for and he tells her she is impatient.

Sam tells her to get down and he steps on the gas racing towards the men when a helicopter and military Hummers arrive to get the armed men. Hetty says to remind her to send the CO at the Navy Weapons station a nice bottle of scotch.

Sam arrives at the bus to see the four military veterans from the home knock one of the men out with a butt of one of the guns. Ginger reveals that Louis told her where the real coin was but she won’t divulge the location. Dechamps stands with Sam at the hospital and reveals the coin was buried with Louis son and she has no intention of digging up a grave.

Nell catches Eric talking to Nate, where she tells him it is okay that he is seeing Nate; Nell admits that she is seeing him as her psychologist too. Its been a tough year for all of them; Eric admits he doesn’t know how to share what he goes through. Nell admits she isn’t as strong as she appears to be either. They hug each other tightly.

Callen arrives at Alexandra’s house with his father. He tells her it isn’t official business and reveal that Garrison is her father. Callen agrees it is time to give her some answers to her questions; she invites them in for dinner and they agree to stay. Garrison gives Jake a coin he had once given to his grandmother; Callen flashes back to special moment between him and his father.

Hetty arrives at the hospital to find Owen Granger’s room empty. The nurse explains he is gone, from what she understands is one minute he was there and the next was gone; they believe he pulled out his IV and just left. She hands her a paper with Henrietta written on it.

He tells her to be safe and he has had enough of hospitals for one life time, he has some unfinished business to do. He says he doesn’t know what she is going to tell everyone but she will think of something, she always does.

MIGUEL FERRER
In memory of our friend and collegue, whose strength and kindness will forever inspire us all.