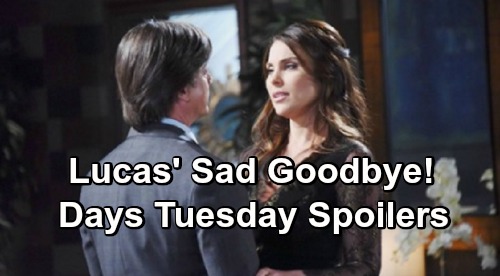 Days of Our Lives (DOOL) spoilers for Tuesday, December 11, tease that Julie (Susan Seaforth Hayes) will take a trip down memory lane. She’ll reflect on her time in Salem as DOOL celebrates Hayes’ 50th anniversary in the role. It sounds like Days fans will be treated to some fun stories and Julie flashbacks, so don’t miss this very special episode.

Meanwhile, Lani (Sal Stowers) and Eli (Lamon Archey) will have a big announcement to make. It took some work, but Eli finally convinced Lani to become a couple – with a little help from Sheila (Tionne “T-Boz” Watkins), of course. Now that they’re officially an item, Days spoilers say they’ll decide to go public. They’ll fill their families in on the happy news and start their next chapter together.

Over with Sonny (Freddie Smith) and Will (Chandler Massey), they’ll feel backed into a corner. Leo (Greg Rikaart) has incriminating evidence that could put them behind bars, so they’ll fear there’s no way out of this. However, they’ll ultimately choose to try one last strategy. It’ll be their final attempt to derail Leo’s wedding plans and get this guy off their backs.

Unfortunately, Leo can be awfully slippery. He’s seemingly prepared for every possible obstacle, so Will and Sonny will be no match for Leo’s sneakiness. Days of Our Lives spoilers say their efforts will fail, which means Sonny will have accept his fate. He’ll marry Leo later this week, December 10-14, but he certainly won’t be pleased about it!

Elsewhere, Lucas (Bryan Dattilo) will meet up with his closest friends and family members. His visit to Italy helped him see just how much Allie needs him right now. Lucas is ready to move across the world to be with her, but he’ll have to say some tough goodbyes first.

Days spoilers reveal that Lucas will bid Kate (Lauren Koslow) farewell along with a few others. Chloe (Nadia Bjorlin) will likely get one more chance to see Lucas before he goes. They’re parting ways on good terms, so that should soften the blow of moving day. Chloe and Lucas love each other, but it’s time to take separate paths and do what’s best for them individually. The good news is Lucas will return in 2019!

It looks like some gripping scenes are coming up in Salem. We’ll give you updates as other Days of Our Lives details emerge. Stay tuned to DOOL and don’t forget to check CDL often for the latest Days of Our Lives spoilers, updates and news.