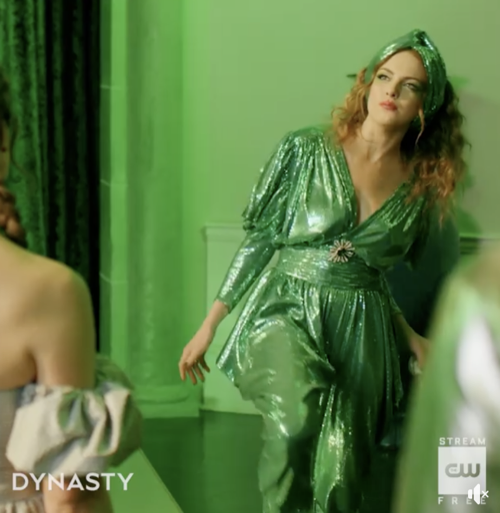 Tonight on the CW Dynasty the reboot of the 1980 series that followed the Carrington family airs with an all-new Friday, November 30, 2018, episode and we have your Dynasty recap below.  On tonight’s Dynasty season 2 episode 7 “A Temporary Infestation,” as per the CW synopsis, “In the wake of Thanksgiving, the Carringtons are ready to embrace a fresh start. As Fallon dives into a new business endeavor, she inadvertently collides with Culhane’s secret life. Meanwhile, Sam employs Kirby’s help as he embarks on a new personal venture, and as Cristal celebrates the next step of her relationship with Blake, Alexis does her best to drive a wedge between them.”

Randy was supposed to meet Alexis at 9 am but she is still watching Claudia’s baby and she is mad at Hank for putting her in this position.

Blake and Cristal wake up in bed together, he tells her that he wants to put a ring on her finger and tell the world that she is his. Meanwhile, Culhane, Fallon, Sam, Anders, and Kirby are wondering where Blake is.

Alexis walks in and nobody is impressed to see her. Blake then walks in with Cristal and tells everyone to grab some champagne, he asked Cristal to marry him. Kirby asks if Cristal is pregnant, she says no and Alexis says thank God.

Alexis has a bright idea, she plants Claudia’s baby in a nativity scene outside the house so nobody suspects her being messed up with Hank. Alexis calls child services, they are going to send someone to check it out. Meanwhile, Sam is thrilled as he has been praying for a baby. Blake picks up the baby and it vomits all over him. Alexis tells him that maybe the baby is seen since the physic told them that they were destined to be together.

Fallon wants to dive into a new business endeavor, she is nervous since selling the company. She speaks to Monica about creating a new company, Broken Glass Recording Artists.

Alexis and Cristal share words, Cristal tells her that she loves Blake, they are going to look at rings.

Sam is excited, he is walking around with the baby in a baby carrier attached to his chest. Sam enlists Kirby’s help to find him a nanny for the aby, and agrees to wipe the slate clean in return.

Cristal is picking out a ring with Blake, she tells him about Alexis’ words, he tells her to forget about her, she is delusional.

Alexis returns to her apartment and finds all the flowers and plants dead.

Fallon tells Culhane about her new venture and it begins Tuesday night when they bring Atlanta’s most promising artists to Club Colby.

Monica tells Jeff that he has to get his poker tables out by Tuesday night because they will be using the room for her and Fallon’s new venture. Jeff tries to discourage Monica and Culhane tries to do the same with Fallon.

Cristal visits Alexis and she tells her she is right, and with a grandchild, she is going nowhere. Cristal has brought muffins, Alexis says that she doesn’t trust her, they are not friends. Cristal sees all the dead plants and tells Alexis she hopes there are no bad vibes in the place.

Jeff and Culhane share a drink, they don’t know what to do, how are they going to tell Ava that there is no poker game.

Cristal gets sage to burn in Alexis’ place, Cristal lights it and waves it all around and opens the window for the negative energy to leave. All of a sudden the sprinklers go one and the two run around.

Alexis goes to see Blake and tells him that Cristal ruined her loft and she is going to show him exactly who she is.

Monica and Fallon have an argument regarding Whitney and ask Jeff for his opinion while he is removing the tables. Jeff tells them that it is not to late to just end this whole thing if they are already arguing. Fallon backs off and tells Monica that she will back off and give her all the creative power. Monica asks Fallon what this is really about, she says that she just needs to keep busy. She loves Culhane but she can’t stop thinking about Liam.

Cristal offers to pay for the damage in Alexis loft. Cristal brings Alexis into the loft and weird things are going on.

Culhane meets Ava and gives her the money she should have made from the game. Ava wants to know what the problem is, he says that it is a temporary hiccup. Ava warns that he better get the game back on for the following week, or else.

Time for the launch party and there is a pretty good crowd that showed up. Jeff speaks to Culhane who confirms that he made the delivery. Meanwhile, Fallon is talking to a woman, who is Ava disguised and there to watch what is going on.

Sam and Kirby are watching the baby when Sam is getting a tattoo, Kirby wants Anders to get a tattoo too. Kirby takes the baby, the tattoo artists, Manuel, tell her to put the baby on his side because he could have gas. Kirby does what he says and the baby quiets. Sam turns to Manuel and hires him to be the nanny.

Cristal walks into her room with Alexis and there is red writing all over the wall, it says that she is a disgrace and brought a curse into the house. Cristal admits to killing Alexis’ plants and setting off the sprinklers, she did it on purpose because she felt she was gunning for her. Alexis set Cristal up and she videotaped the whole scene, she threatens to show it to Blake so he breaks up with her.

At Club Colby an alarm goes off, Monica falls to the floor when everyone starts running for the exit because there is smoke everywhere, Ava is seen smiling and Fallon is frightened for Monica.

Alexis shows the video to Blake and tells him that he should know what he goes to bed with every night. Blake tells Alexis to give he and Cristal a moment. Blake hugs Cristal and tells her to forget about Alexis, things will work themselves out.

Jeff is with Monica, he tells her that it is all his fault what happened at the club, a broken ankle, because he has been lying to her all this time.