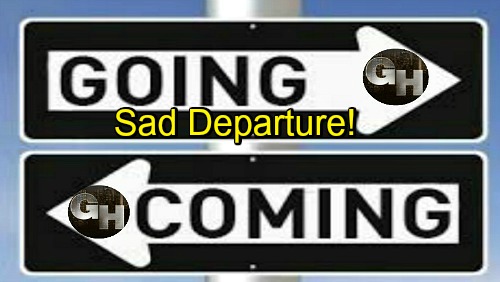 General Hospital (GH) spoilers reveal that we’ve got some comings and goings news to pass along. For starters, let’s talk about a departure. Kimberly McCullough has wrapped up her latest stint as Robin, but she’ll undoubtedly be back. GH is nice enough to let us see Robin catch up with her loved ones from time to time. She’s even considering the idea of getting to know Peter (Wes Ramsey) a little better.

That should provide some great drama for future stories. For now, General Hospital viewers will hate to see Robin go! Many fans reached out to McCullough on social media and praised her sweet scenes with Steve Burton (Jason). McCullough was quick to praise her costar as well. She tweeted, “Awww thank you. It’s always a treat to get to act with @1SteveBurton.”

Next, we should mention the young woman playing Nina’s (Michelle Stafford) potential daughter. General Hospital watchers were surprised by how fast Curtis (Donnell Turner) tracked down Sasha Gilmore. She’s being played by Sofia Mattsson, a Swedish actress and model who’s making her daytime debut. Her list of primetime credits includes roles on Two and Half Men, Campus Security and NCIS.

There’s no word yet on how long Sasha will be sticking around. It sounds like it depends on the results of the DNA test Valentin (James Patrick Stuart) ordered! He even called for a second one at another location to ensure accuracy. Of course, even two tests can’t guarantee much. Soaps are known for all kinds of funny business, so just keep that in mind.

In other news, one GH alum is taking on a new gig. He’ll actually be replacing another GH alum on a different soap. Tyler Christopher is best known for his role as Nikolas Cassadine on General Hospital, but he eventually landed at Days of Our Lives. He plays the devious Stefan DiMera, but he’s stepping away from the part for a while. Brandon Barash (ex-Johnny Zacchara) will serve as a temporary recast.

Due to the advance taping schedule at Days, it’ll be a few months before Barash shows up on screen. You can check out Barash’s version of Stefan in early 2019. As for what’s ahead in Port Charles, General Hospital spoilers say there’ll be plenty of story shockers and returns. Genie Francis’ comeback as Laura is inching closer, so viewers will want to stay tuned.