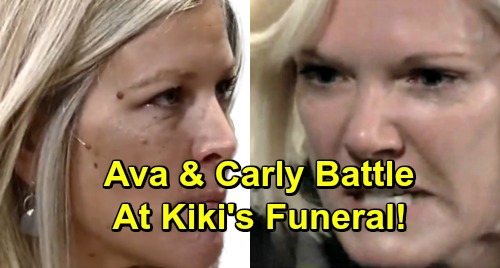 General Hospital (GH) spoilers tease that Ava (Maura West) will have a major meltdown at Kiki’s (Hayley Erin) funeral. She’s not in a good mental state anyway, but things are about to get even worse. You can bet Ryan (Jon Lindstrom) will be egging Ava on throughout all this. He loves Ava’s dark side, so he won’t want her to see light at the end of this tunnel.

“Kevin” will pretend he’s all about Ava and healing her broken heart. In reality, he’ll want to mold it into something bitter and twisted. This is all part of Ryan’s dangerous game. General Hospital spoilers say Kiki’s memorial service will help with Ryan’s plan. It’ll force Ava to face the facts and leave her lashing out at those around her.

There’s one person who will get most of Ava’s wrath on new GH episodes next week, December 10-14. Carly (Laura Wright) will manage to push Ava’s buttons at exactly the wrong time. Of course, Carly probably won’t mean to. She hates Ava’s guts, but she knows what it’s like to lose a child. Morgan’s (Bryan Craig) death was the toughest thing Carly ever had to go through. She’ll feel Ava’s pain, so she may try to offer sympathy.

Carly could extend an olive branch temporarily and hope that they can connect over their losses. She might think she can help Ava in some small way. Unfortunately, Ava doesn’t want help from anyone but “Kevin” right now. She especially doesn’t want assistance from a fierce GH foe like Carly.

Ava may accuse Carly of making Kiki’s demise all about her. She could rant about Morgan and suggest that Carly must feel satisfied. Ava might contend that she’s suffering just like Carly always wanted her to. She’d better watch what she says about Carly’s beloved son! Grief or no grief, Carly won’t let anyone get away with trashing Morgan’s name or memory.

General Hospital spoilers say Ava will cause an explosive scene at the funeral. She won’t care who witnesses her crazy outburst. Ava’s a mess over her regrets and rage, so she’ll unleash her emotions in front of all Kiki’s loved ones. It sounds like this memorial service will be a can’t-miss event!

GH fans won’t want to miss the shockers and shakeups ahead. We’ll give you updates as other news comes in. Stay tuned to the ABC soap and don’t forget to check CDL often for the latest General Hospital spoilers, updates and news.