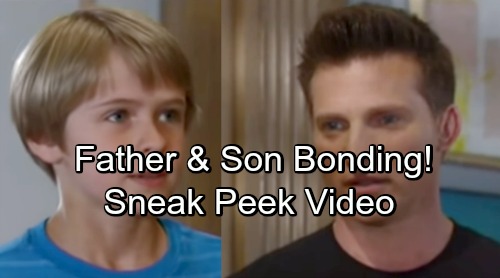 General Hospital (GH) spoilers tease that Franco (Roger Howarth) will be anxious about his big meeting. Monday’s sneak peek video offers a glimpse at what’s to come. At home, Liz (Rebecca Herbst) will do her best to nudge Franco out the door. He’ll suggest that he’s already decades late for a chat about Jim Harvey (Greg Evigan).

Franco will wish he could’ve filled Steven Blake (Pressly Coker) in before the abuse took place, but all he can do now is offer closure. Liz will point out that Steven’s probably nervous as well, but that won’t do much to ease Franco’s fears. He’ll worry that he’s going to come home all weirded out, which wouldn’t be great since it’s Jake’s (Hudson West) birthday.

Liz will reassure Franco and exchange his mug for a to-go thermos. She’ll think he needs to go so he can come back and start celebrating. After a sweet kiss, Franco will leave Liz to make Jake’s birthday cake. She’ll be busy whipping it up when the doorbell rings later. 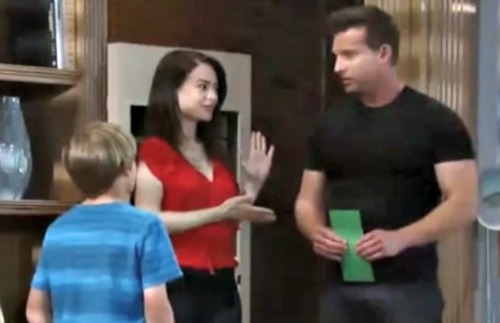 General Hospital spoilers say Liz will be surprised to see Jason (Steve Burton). He’ll announce that he’s there with a birthday gift. Jason’s voice will trail off as he’s about to say who it’s for. Fortunately, Liz will finish up Jason’s statement. She’ll call Jake his son to give him a little confidence boost.

Things are still a bit uncomfortable for Jason and Jake, but that’s OK. It’ll take time to move past the awkwardness. That’s why it’s important to squeeze in moments like this. GH spoilers say Liz will call Jake downstairs to thank his dad. At his mom’s urging, Jake will try to be pleasant and express his gratitude. It should mean a lot to Jason on this special occasion.