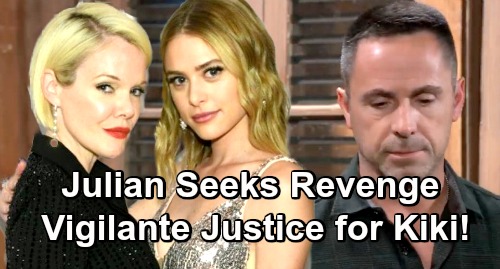 General Hospital spoilers tease that Julian Jerome’s (William DeVry) rage at his niece Kiki Jerome’s (Hayley Erin) murder is boiling over inside him. He has been increasingly upset and angry, and taking his frustrations out on those around him verbally, and gave a pretty good beat down to some boxes he was trying to break down outside of Charlie’s Pub too.

It doesn’t take a lot to connect Julian’s foul mood to the unfortunate events of the past few days. When he first heard of the murder, and that Kiki’s boyfriend Griffin Munro (Matt Cohen) had been implicated, the first thing he did was rush to the Port Charles Police Station ready to beat a confession out of him – he actually had to be restrained physically and then told to leave!

Later, Ava Jerome (Maura West) came to finish off Griffin and he and “Kevin Collins” aka Ryan Chamberlain, (Jon Lindstrom) the actual murderer, had to calm her down and walk her out of the station before she did something she couldn’t take back.

Julian no doubt is upset that the murderer has not been found, even though he knows Griffin was exonerated and did not do the foul deed. But he, like many others in Port Charles, is probably thinking the police are not solving the case fast enough, and maybe thinks he can find the killer quicker by using his own methods.

Catching a serial killer and avenging his niece’s murder might be a good reason enough for Julian to reach out to his old mob ties to keep a look out and ears open. If no one else can find someone hiding in plain sight, a mobster usually can.

So will Julian become a vigilante or consult his old mob network to find the killer and bring him to justice? Stay tuned to General Hospital and keep checking CDL General Hospital spoilers frequently to see if Julian, or someone else outside of the PCPD gets a clue to ultimately take Ryan down.