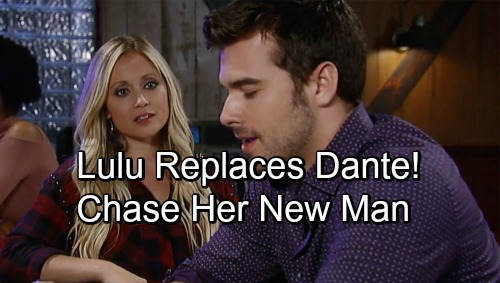 General Hospital (GH) spoilers reveal that Dante’s (Dominic Zamprogna) absence will continue to be felt. Lulu (Emme Rylan) understands why Dante had to accept his current mission, but that doesn’t mean she has to like it. She has no idea where Dante is or when he might be back. The wondering and waiting will really take a toll on Lulu in the coming weeks.

In fact, Lulu’s already starting to get a bit restless. During a recent chat with Chase (Josh Swickard), Lulu made an intriguing admission. She suggested that being around him somehow makes her feel closer to Dante – wherever he may be.

Lulu seems glum about Dante’s circumstances, but she finds some comfort in hanging out with his old partner. This certainly sounds like a slippery slope! Lulu will probably want to spend more and more time with Chase. As their bond grows, so could temptation.

Of course, Chase’s new partner could complicate things. He teased Valerie (Brytni Sarpy) about her Phillies mug, so they’re already engaging in some flirty banter. There was nothing over the top yet, but Chase flashed those pearly whites and showed he’s willing to get to know Valerie.

Thanks to this new partnership, Lulu’s heart may lead her astray. She was visibly upset over Dante being replaced at the PCPD, so this could be the beginning of GH trouble. Could Lulu try to replace him on a romantic level, too?

After Valerie was promoted, Lulu suddenly realized the world wouldn’t just stop because Dante left. Time will march on and Lulu will remain on her own in Port Charles. She’s bound to get lonely, especially when she hears no news at all. Dante won’t give her anything she can hold on to or hope for.

Naturally, Chase will want to be there for Lulu as she struggles. This could set up a love triangle now that Valerie’s in the picture. As Valerie and Chase connect through work, that might spark some strange feelings of jealousy for Lulu. That’s especially true considering Dante’s history with Valerie and all the pain that brought. This could jumpstart Lulu’s betrayal and destroy her marriage.

General Hospital may end up nudging Valerie toward Kristina (Lexi Ainsworth) in the end. That’d leave the door wide open for a Chase and Lulu pairing. They could move full-speed ahead, but what happens if Zamprogna returns or a recast shows up? Lulu’s love life could turn into a total disaster!