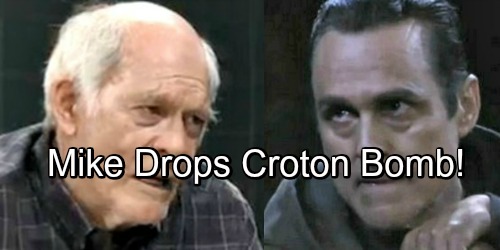 General Hospital (GH) spoilers tease that Sonny (Maurice Benard) will feel like his world is crumbling. He’s been busy juggling several family issues and all of them are about to get worse. For starters, there’s Carly’s (Laura Wright) predicament. After all her courtroom drama, Carly will land in a mental institution. That’ll be rough on her, so Sonny will have to worry about how she’s doing in there.

Of course, Sonny will also fret about Michael (Chad Duell) getting too close to Nelle (Chloe Lanier). He may buy Nelle’s staircase accusations, but that doesn’t mean he trusts her. Sonny will still feel like Nelle drove Carly to her breaking point. He’ll hate to see Nelle using Carly’s pain to reel in Michael, but he’ll have even bigger problems to deal with.

Naturally, General Hospital spoilers say Mike (Max Gail) will continue to decline in the coming months. His mental health will rapidly deteriorate, so that’ll be hard for Sonny to cope with. To complicate matters even further, Mike will spill more Croton news in his lucid moments. Sonny will face another shocker regarding the body and gun he ditched in that field.

Let’s recap some of Sonny’s confusion. He doesn’t believe Mike was anywhere near that field when he disposed of the proof, so that’s puzzle number one. Plus, Mike somehow knew the area would be disturbed soon. Max (Derk Cheetwood) was able to confirm Mike’s claims about new construction there.

When Sonny and Jason (Steve Burton) tried to dig up the corpse and weapon, both of them were missing. They assume someone got there before them, but who was it? Perhaps that’s what Mike will want to talk about next. Will he tip Sonny off to who moved everything? It’s possible it was Mike himself, so he may tell Sonny when and why he took care of business.

If somebody was closing in on the truth, Mike might’ve felt like he had to unearth the evidence to protect his son. Sonny might be concerned about the new site of the gun and body. He’d still want to make sure there were no traces of his DNA left behind. This could really add to his stress level!

Then again, the person responsible could’ve spilled something to Mike at some point. In that case, Sonny would hope to pry a name out of his father. Thanks to Mike’s worsening Alzheimer’s, that wouldn’t be an easy task.

Regardless, GH spoilers say things are about to get truly dangerous. Mike’s next revelation will clue Sonny in on just how risky this is. It’s clear that Sonny needs to fix his mess right away or his life could indeed be over. A prison stint could be in his future if he doesn’t act fast.

General Hospital fans won’t want to miss the bombs that drop this summer! We’ll give you updates as other GH details emerge. Stay tuned to the ABC soap and don’t forget to check CDL often for the latest General Hospital spoilers, updates and news.