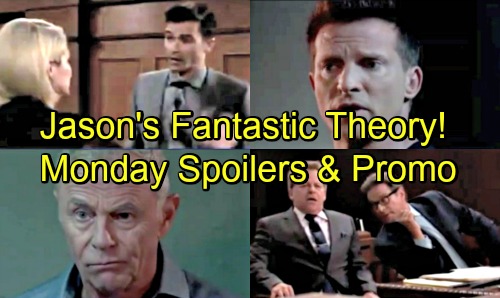 General Hospital (GH) spoilers for Monday, August 13, tease that Liz (Rebecca Herbst) will give Cameron (William Lipton) a stern lecture. Chase (Josh Swickard) busted the teen for shoplifting, so Liz will wonder what her son was thinking. She’ll suspect that he had a partner in crime, but Cam will promise that he acted alone. He definitely won’t want Josslyn (Eden McCoy) dragged into this mess.

Of course, Joss had no idea Cameron was going to steal those pricy earbuds. She would’ve tried to stop him if she’d known. Josslyn did some shoplifting as well during Carly’s (Laura Wright) ordeal, but she’s done with theft now. Still, she’ll feel guilty as Oscar (Garren Stitt) rants about Cameron’s actions. Joss will insist that she’s the bad influence, so Oscar should be surprised by her next confession.

Other GH spoilers say Dr. Bensch (James DePaiva) will be pleased with Scott’s (Kin Shriner) strategy. At Ava’s (Maura West) insistence, Scott just asked Griffin (Matt Cohen) the one question he didn’t want to hear. On Monday’s new GH episode, August 13, Griffin will have to answer if he had sex with Kiki (Hayley Erin). Since he won’t want to lie under oath, it looks like Griffin will confirm their one-night stand.

When Scott returns to his seat, Dr. Bensch will praise him for turning this whole case around. He’ll insist that his lawyer should keep it up, but Scott will look miserable. The courtroom drama just took an ugly turn, so Scott will realize things may not work out well for Kiki.

After Griffin’s fiasco on the stand, Kiki will push Alexis (Nancy Lee Grahn) to be straight with her. She’ll ask if they still have a shot at winning this, but Alexis won’t exactly look hopeful. She may argue that if Kiki wanted a victory, she should’ve been honest from the get-go. Alexis wouldn’t have even put Griffin on the stand if she’d known the truth.

Nevertheless, Kiki’s encounter with Griffin was consensual. Alexis will try to highlight the fact that Kiki wanted to have sex with Griffin, someone she cared about. Dr. Bensch is still scum who needs to pay. Alexis will just keep her fingers crossed that the jury can understand that.

Later, Ava will let Griffin have it. She’ll fume as she thinks about all those times Griffin promised nothing was going on with her daughter. As Ava’s rage explodes, she’ll give Griffin a fierce slap. General Hospital spoilers state that Griffin will apologize, but it won’t do any good. Ava’s livid and that means revenge will be sweet!

Elsewhere, Anna (Finola Hughes) will object to Finn’s (Michael Easton) plan with Robert (Tristan Rogers). She’ll tell her love that she doesn’t like him risking his life like this. Finn will maintain that he couldn’t just leave Anna hanging. He’ll feel confident that they can get through the kidnapping chaos together, but some curveballs are headed their way.

Meanwhile, Robert will seek Jason’s (Steve Burton) help. Since Anna disabled the tracking device, Robert will realize he could use some backup. He’ll urge Jason to assist with his mission to save Finn and Anna.

Once Robert recaps everything, Jason will poke holes in his theory. Robert assumes that Anna was the target, but Jason won’t be so sure. He may think Anna was the bait they needed to secure Finn, which seems to be the case based on new developments.

General Hospital fans won’t want to miss Robert and Jason’s big adventure. We’ll give you updates as other GH news comes in. Stick with the ABC soap and don’t forget to check CDL often for the latest General Hospital spoilers, updates and news.