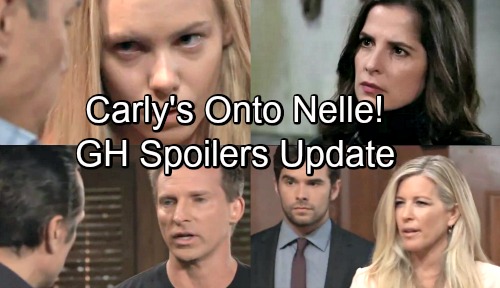 General Hospital (GH) spoilers for Monday, October 15, tease that Kevin (Jon Lindstrom) will feel powerless at Ferncliff. When Ryan (Jon Lindstrom) stops by, Kevin will insist that he could still help if his brother would let him. Of course, Kevin will want to help himself as well! He’s desperate to earn his freedom, but his desire to fix Ryan is what got him into this mess.

Ryan will pass on taking Kevin’s advice, so his charade will continue. Unfortunately, dealing with Laura (Genie Francis) will become increasingly difficult. During an emotional moment, Laura will finally ask what “Kevin’s” done with her husband. She won’t understand why “Kevin” keeps pushing her away and exhibiting such strange behavior.

Across town, Sam (Kelly Monaco) will be miffed over Liz’s (Rebecca Herbst) suggestion. She’ll think Liz is telling her to steer clear of Jason (Steve Burton) to make Drew’s (Billy Miller) life easier. Sam may acknowledge that things are difficult for Drew right now. His son is dying and there’s nothing he can do about it. However, that doesn’t mean Sam should let Drew’s feelings dictate her own romantic path.

Sadly, Drew also has a new predicament to wrestle with. Margaux (Elizabeth Hendrickson) is willing to hand over his memories, but it’d mean turning against Sonny (Maurice Benard). Drew rejected Margaux’s offer, but she wanted him to truly consider it and get back to her.

On Monday’s GH, Drew will find himself contemplating his options and naturally mulling over Oscar’s battle, too. Poor Oscar’s never far from his thoughts lately. When Franco (Roger Howarth) appears, he’ll see Drew’s worries written all over his face. General Hospital spoilers say Franco will step up and try to be a good friend. Whether Drew wants to talk or not, Franco will want to be there for him.

Elsewhere, Jason will want Sonny to trust him. They’ll rehash their plan to make Margaux see the light about her shady father. It’s not like the guy was some admirable hero. Jason will argue that Vincent Marino wasn’t an innocent victim. He was a criminal who got burned by the business and Sonny just happened to get caught in his early demise.

If Jason and Sonny can make Margaux see it from that perspective, they may be able to get her off their backs. However, there’s a chance this plan could backfire. Margaux’s in an angry, vulnerable place at the moment. She probably won’t like it if her dad’s memory is sullied.

At the courthouse, Nelle (Chloe Lanier) will slip up and talk about how much “Wiley’s” grown since she last saw him. Carly (Laura Wright) will raise an eyebrow at the statement. She’ll suggest Nelle couldn’t know that since this should be the first time they’ve met.

Nelle will cover and argue that she simply saw the picture Brad (Parry Shen) posted online. Just before court begins, Carly will give Nelle one last chance to make her big announcement. She mentioned there was something she wanted to tell Michael (Chad Duell), but it’ll have to wait. Nelle won’t be divulging any baby swap news just yet!

"If Margaux wants to come at me, bring it on." #GH55 pic.twitter.com/CuO0JpZzUL