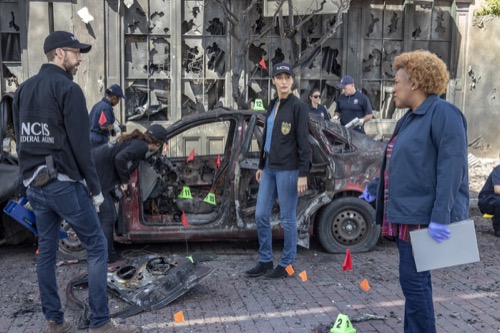 Tonight on CBS NCIS: New Orleans returns with an all-new Tuesday, November 13, 2018, season 5 episode 7 called, “Sheepdogs,” and we have your NCIS: New Orleans recap below. On tonight’s NCIS: New Orleans episode as per the CBS synopsis, “Following a deadly car explosion in the French Quarter, the NCIS team interrogates a professor and former member of a student protest organization. Also, Tammy discovers a secret about Hannah’s personal life.”

A tragic car accident took the life of a young sailor on tonight’s all-new episode of “NCIS: New Orleans”.

The accident occurred in the French Quarter. A couple of guys were crossing the street when a car sped around the corner and nearly hit them. The guys were able to get out of the car’s way in time and it ended up hitting a parked vehicle, however, Seamen Kyle Jones had gone to check on the driver and not long after he did the car blew up. Normally, a car needs to catch fire before it creates an explosion and so the car shouldn’t have exploded as it did. It could only have exploded because there was a device already in the car. It could have been placed there to kill the driver or the driver could have been transporting it as a means to one day use it. The FBI, ATF, and NCIS were all called in and their first suspected that driver was a radical.

The driver was Paul Franka and he was part of a group called S.A.O. It was a social activist group that was all about stopping government overreach and corruption. Pride’s had some experience with this group and he told his team that they generally weren’t harmful. They were all about protesting and using legal means to get answers. Pride was so sure that S.A.O. couldn’t have been involved that he went to the group and asked them about Franka. Franka had been alone in his car when it got into an accident and it led to his death. Pride wanted to know if Franka had been involved with anything on the side and he was told the group didn’t tolerate violence. They kicked out anyone that was willing to use extreme measures and Franka had hung out with someone like that.

Franka used to date Yasmin Hendricks. She was thrown out of the group for the method she wanted to use and so the team went to go collect her. They found her car and evidence that there were other explosive devices out there, but Yasmin wasn’t talking. She actually wasn’t surprised to see federal agents when they came to arrest her and she by far the calmest perp the team had ever investigated. The usual agents were getting nowhere with her and so Khoury asked to speak to Yasmin alone. She thought she could connect with another first generation Arabic woman and it worked for a while. It got Yasmin talking and what she talked about most was how she was following her father’s footsteps.

Yasmin said her father was a “lion of God”. He was some big shot that gave up raising her in order to go fight for Allah and Yasmin said how proud she was to be following his footsteps yet Khoury noticed that Yasmin fixes her clothes when she’s nervous and she did that when she talked about her father. It was a tell of Yasmin’s and so Khoury looked into Yasmin’s family. Her father was no freedom fighter. He was actually a wealthy doctor that wanted nothing to do with her and who abandoned her and her mother. It was her mother that was Muslim and her mother hadn’t wanted much to do with Yasmin either. She sent her away to a boarding school in New Hampshire when there were probably much closer schools nearby.

Khoury confronted Yasmin with the truth. She told the young woman that she wasn’t some radicalized Muslim woman and that she was actually a little girl who desperately someone to love her. Her parents pushed her away and that’s why she lied to everyone about them. Yasmin created another reality in which she had parents that cared about her and she attached herself to groups like S.A.O. because she thought she could belong there though they rejected her too. She has a problem with rejection and she planted that bomb on Franka to punish him for breaking up with her. And so Khoury asked if she felt that way about her Professor Bernadine Caldwell who was in charge of S.A.O.

The professor had brought her students together to form the group. She wanted to teach them activism and, it seems to win her approval, Yasmin had tried to make everyone respect their group. Yasmin did this because the professor had invited her over to her house and had cared for her. It had been the first bit of affection Yasmin ever received and she revered the professor. Then she supposedly rejected Yasmin and so that’s why everyone believed Yasmin was their bomber yet the team got a fingerprint off the device that killed Franka and it belonged to the professor. It also was proof that the professor was involved in a bombing several years ago that killed people. The team suspected the professor had something to do with the recent bombings and so they brought her in.

The professor later owned up to the bombing years ago. She said she had been young and that she thought no one was around, but that experience was why she taught her student violence wasn’t the answer. She said she didn’t want it to lead the feds to her door and that’s why she threw out Yasmin. Yasmin had let on to Paul that she was going to use a bomb at their next protest and so the professor brought Yasmin to the zoo where they could talk privately away from school. Bernadine said that she told Yasmin that bombs should never be the next step and she told her that she couldn’t be in SAO anymore. She hadn’t reported it because she thought that Yasmin had understood where she was coming from and it turns out Yasmin felt betrayed.

Yasmin’s childhood home burned down and after that, she had been sent away to school. The team realized that Yasmin must have caused that fire and that she did it to get back at her mother for ignoring her. Then Franka breaks up with her in a car and he later dies in the same car. It makes sense that her next step would be to frame the professor for the bombing and because she targets things that are personal to her – the team knew she would target the zoo. It was where she shared a private moment with the professor and so the team went there searching the bombs. They later found the bomb over by the alligator pit and Sebastian was able to diffuse it, except the time on the bomb said that it would have gone off in two hours.

The team knew that there were two other bombs out there and that they were going off soon. They decided the best way to get answers out of Yasmin was to send in the professor. Bernadine had gone in there and she had tried to reason with Yasmin. Unfortunately, the young woman didn’t want to be reasoned with and she told her professor how they were both involved. Yasmin revealed she bought all the parts to the bomb using Bernadine’s credit cards and how the professor’s fingerprints were on everything. Yasmin was setting Bernadine up so that everyone would think they were in it together and once Bernadine realized that she had an asthma attack. She tried to use her inhaler and it hadn’t worked.

Yasmin had tampered with it because she knew that Bernadine would need it soon. So the team was dealing with a cold-blooded killer and that changed how Khoury interrogated Yasmin. She went back into the room and she pretended like she was going to grill her however she and the team staged a fake explosion to trick Yasmin. She thought her plan went ahead with no one the wiser and so she revealed where the two remaining bombs were. Yasmin went on about the place that hired Bernadine and the art museum she threw in there to cause it chaos. She thought she won and so that’s when Khoury revealed that the “bombing” was all theater. They staged it to get Yasmin to talk and thankfully they were able to take care of the bombs once they knew where they were.

Yasmin was a very troubled young woman and she was going to do some hard time for everything she did.

Khoury was thanked for the part she did and she was advised by her new friends that told her that she should go see her daughter after all of this, but for some reason, the agent couldn’t walk up to the door.