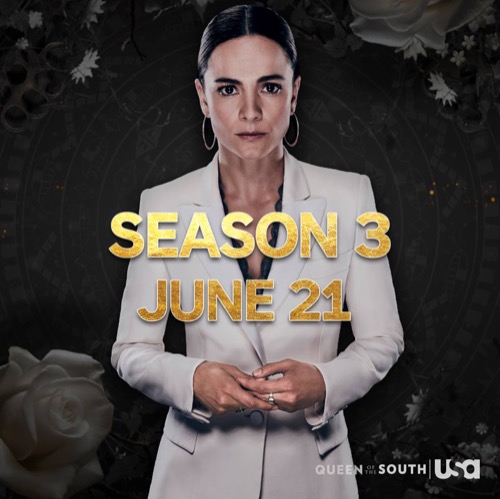 Off the coast of France

Teresa is on a yacht. She docks. The SWAT team comes rushing in. They find a bag while Teresa and Pote leave on a small boat. The yacht blows up.

Teresa is at a small café. She talks to Ivan via video. She tells him she is expecting a large deposit tomorrow. She is working on partnering with someone. He gives her advice on crypto currency. She strikes up a conversation with the waiter. He is also Spanish. She heads back to his room later. They fall asleep. Teresa has a nightmare that Camila has found her. She wakes up and leaves.

Camila speaks in an interview with a reporter. She tells the reporter she was falsely imprisoned. She talks about what she plans to do as governor. She is compared to her husband. She ends the interview. She checks in with the DEA.

Pote calls Teresa. He tells her to hurry and come home. He is making a special dish. She is walking through a market. A woman sees her and begins chasing her. Teresa climbs a trellis and hides. The woman doesn’t see her. She makes a call to someone reporting that she spotted Teresa.

Camila arrives at her daughter’s engagement party. She makes a speech welcoming her fiancée to the family. She meets with Cortez and Cesar in the back. Cesar wants to know why his shipment was stopped by the DEA. Camila is also upset about the loss. As governor she should be receiving a cut.

Teresa comes home and tells Pote they need to go. Someone was following her.

Teresa calls her customer and tells him he needs to get his product tonight or he won’t get it at all. Meanwhile, Camila meets with Reynaldo. She thinks they need to take the cartel away from Boaz. They both tell her to relax and enjoy the fruits of her labor.

Teresa and Pote arrive at a club. She is there to meet a man named Rocco. Her customer hands her a headphone. Rocco loves grand entrances. He speaks to her. He tells her that he has learned plenty about her. She walks the club looking for him. She finds him. She asks him what is going on. His women with guns step forward. Pote pulls his gun. Teresa tells him to lower his gun. They negotiate. She promises Oleg will get his shipment and he will get his money. They leave.

Camila is looking at a bulletin board. She is tracking Teresa. Cortez comes in. He talks shipments with her. All she wants to do is stop Teresa.

Camila’s daughter debuts her wedding dress. Camila tells her she looks beautiful. Her daughter asks her what she was talking to Boaz about. They talk about Cortez. She thinks Camila shouldn’t trust him. She also wants to see Teresa dead. Her dad would be her if it wasn’t for her.

Teresa and Pote sit at the port waiting to bribe the port official. While they wait, Teresa asks him if he has family. He tells her he was married once. It didn’t work out. He has no kids. A car comes into the lot. They meet with Falcon. Pote checks him. He asks where the money is. Teresa tells him he is coming with them. The police come out of nowhere. They hide behind the car. Pote shoots. Teresa finds this strange. They have no back-up. Teresa comes out from behind the car. They reveal that they are there for their cut. Pote shoots the male officer. Teresa tells the female officer she can live but she has to help them.

The next morning, they get their shipment. Meanwhile, Camila meets with a former agent named Alonzo in a hotel room. She talks about getting Boaz out of her hair. If he can help her, he will get reinstated. They drink to it.

Teresa is walking down the street. An old fortune teller asks her to pick a card. The card is of The Hermit. She calls Pote and tells him to take sometime off. She plans to as well. As she sits in a café, someone on a bike comes by and throws a bomb in. She gets out in time. Shots are fired.