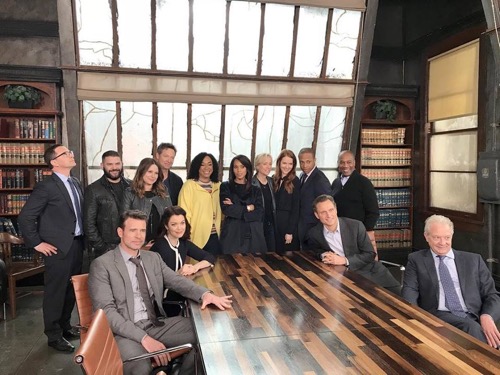 Tonight on ABC Scandal starring Kerry Washington continues with another exciting episode in an all new Thursday, April 19, 2018, season 7 episode 18 called, “Over a Cliff,” and we have the Scandal recap for you below. On tonight’s Scandal season 7 episode 18 as per the ABC synopsis, “The series finale: With the existence of B613 exposed to the world, the Gladiators make the ultimate sacrifice in order to take down Cyrus and Jake.”

So make sure to bookmark this spot and come back from 10 PM – 11 PM ET for our Scandal recap.  While you wait for our recap make sure to check out all our Scandal news, spoilers, videos, pictures & more, right here!

Liv meets with Lonnie in the middle of the night at a warehouse. He wants to get her a Senate hearing, but she has to promise she will make gun control a priority. She promises him. Lonnie shoots himself.

The next day, a special committee has been created to look into B613. David tells Quinn, Liv and the team that they will all be subpoenaed.

Liv meets with her dad in the park. She tells him she exposed B613. He hands her an envelope. It is her trust. He is leaving town. He cannot stand by and watch as Liv is enslaved. She tells him she won’t be. She is handing the country back to the people.

The press is outside the capitol. Mellie is in having a drink. Marcus comes in. She is nervous she will be impeached. She tells him she didn’t invite him here for a pity party. She has to tell him something. She has been so worked up about making all of the right moves. They kiss.

Quinn is freaking out. Her baby hasn’t even taken her first steps and she is going to prison. Charlie doesn’t even know. Abby is scared too. David is going to move on without her. Huck cannot talk in front of 15 people. The cars arrive.

They each take the stand. They all confess to have some involvement with B613. Liv and Mellie give details about Cyrus staging a hijacking.

David tells them all in a room to get their affairs in order. Liv just has one favor. Minutes later, Quinn and Charlie are kissing. They tell him about the B63 hearing. Quinn just wants everyone to stop talking. She asks Charlie to marry them. They get right to it. Huck officiates the ceremony. Charlie admits his real name is Bernard.

Abby calls David who is walking through a dark parking garage. He runs into Jake. He tells Abby he needs to call her back. Jake threatens him, tells him he has a gun. He pulls it out and points it at him. David doesn’t back down. He tells Jake that he isn’t scared. He isn’t going to run so he can shoot him in the back like he has done to so many others. He won’t be his b*tch. He tells Jake that for once in his life he could stop being someone else’s b*tch and do the right thing. David picks up his things and begins walking. He turns around after walking a couple of feet and Jake is gone.

Jake is in Cyrus’ office. Cyrus arrives and asks him if he took care of the David problem. Jake tells him he is going home. Cyrus gets mad. Jake calls him a seal who barks orders but has never gotten his hands dirty.

Abby and David lay on bed. He promises her that he will never leave her. The phone rings. It is Cyrus. David meets him in his office. He admits everything and then asks David to have a drink with him. They drink. David begins to cough. He drops the glass. Falls to the floor and shakes as Cyrus panics silently. Cyrus get son top of him and smothers him with a pillow. He dies. Cyrus grabs his admission of guilt and begins yelling for help.

Abby, Liv and the others are all in the morgue. David’s body is there. They all talk. Liv says they think he has a heart attack. Abby tells them all that Cyrus called.

Quinn and the baby are at Rowan’s house. She begs him to help her run away. He refuses. Meanwhile, Liv and Fitz sit and have a drink. Live is ranting. She is angry. Cyrus is going to beat them. They are all going to jail. This is all her fault. This entire time she has been the problem. He argues against what she is saying. She reminds him that this could be the last time they are in a room alone. They kiss.

Rowan packs all of his things. Fitz takes a phone call. The committee hasn’t made a decision, they have postponed their decision. They have a new witness.

Rowan takes the stand. He admits he is the creator of B613. He is the reason that America is great. Because they are all privileged ungrateful children, he was forced to create B613.

Liv watches as Jake is brought to jail. Quinn watches the news with the others. She is thrilled. Abby cries. Liv heads to see Jake in jail. She tells him she is sorry he is the only one who lost his freedom. She should have left him on that island. Liv cries. He thanks her for coming to see him. They hold hands. She says goodbye.

Liv waits for Cyrus in the oval. She has his letter of resignation ready for him to sign. He tells her he didn’t do anything wrong. He sits and talks about how he cannot even enjoy a drink anymore. His mind won’t stop turning. He gets up and signs before leaving.

Liv and Mellie sit and talk outside. She talks about them working to clean the mess up and mve forward. Liv tells her she has to do it on her own and she will be fine. Liv is moving on to do whatever she wants.

Quinn and the baby welcome Charlie as he is released. Mellie signs a bill in the e oval with Marcus by her side. Liv has dinner with Rowan. Abby and Huck visit David’s grave. Liv sees Fitz out in front of the White House. They say hi.