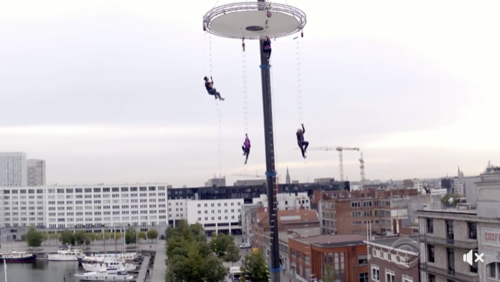 Tonight the CBS series The Amazing Race airs with an all-new Wednesday, January 10, 2018, season 30 episode 2 and we have 1your The Amazing Race recap below. On tonight’s season 30  episode 2 called,“You’re the Best French Fry Ever” as per the CBS synopsis, “The race continues in Antwerp, Belguim.”

Kristi & Jen are in first place and the first team to depart, they are heading to Antwerp, Belgium. First, they are flying to Amsterdam and then taking a train the Antwerp where they will have to find a chocolate shop by 9 am to get their next clue and they have $272.00 for the next leg of the race.

Cody & Jessica are leaving next, Cody makes a comment about how exciting it is to run around with some you like on the race and Jessica gives him this look and he quickly corrects himself and says, love.

Henry & Evan are in the 3rd place and they also get on their way. Trevor & Chris are really excited to be in the race and love that they are getting the chance to integrate into different cultures. Regardless of penalties and difficulties in the last leg, everyone is now on the same playing field.

All teams arrive and get their next clue, its a Roadblock, Who’s Ready To Get High?. This is sky climb, the newest and greatest death-defying adrenaline rush in town. Cedric & Shawn are currently in first place, Trevor & Chris in second place. One teammate from each duo has to climb a ladder up to the sky deck. Trevor & Chris are now in first place and get their next clue, to choose is a Detour called Old Print and its pioneering printing or Diamond Glint where they will have to figure out the total value of a diamond necklace.

April & Sarah, Alex & Connor, Lucas & Brittany, Kristi & Jen are lost and not even at the Roadblock yet. Cody & Jessica are in first place and they decide to do Old Print. Alex & Connor are the first ones to arrive at the Diamond Glint. Cody & Jesica don’t place the letters incorrectly and have to go back and reset them. Cedric & Shawn, after two attempts at the Old Print, complete the Detour and are in first place. Kristi & Jen are also finished Old Print and are in second place, Cody & Jessica in third.

Teams will now have to have one member dress up in a french fry costume called “frites” and face a head to head competition against another team where they have to push dollies loaded with eight large bags of frites. Winners will proceed to the pit stop, losers will have to wait for the next team and race again. If they lose the final race, they will be eliminated. Team members can switch playing if they race more than once.

The first racers are Cedric & Cody, Cedric drops all eight bags of his frites, Cody wins and this means that Cody & Jessica are in first place and the winners of this leg of the race – they win $2500.00 each. Jessica says that this game is their redemption from Big Brother and they are the team to beat. Trevor & Chris are in fifth place and they are the first ones to finish the Diamond Glint Detour. Shawn & Henry are the next ones to race in their frites costumes.

Shawn is in the lead and he wins, Shawn & Cedric are in second place. Next are Evan & Kristi, Kristi wins. Henry & Chris are next to race, Henry has lost his frites, Chris wins. Meanwhile, Eric & Daniel couldn’t do the Old Print, so they head to Diamond Glint. Alex & Evan are racing next, Evan drops a bag – their fourth loss in a row, Alex wins. Lucas & Henry are up next, Henry loses a bag of frites that slows him down, Lucas wins.

Tim & Evan are racing, Tim takes the win. April & Sarah are finally finished at the Diamond Glint are thrilled that they are in ninth place, but Daniel & Eric are done and right behind them. Henry & April are now racing, Henry is in the lead, he is really focused – Henry wins with a dramatic finish, they are team number eight. This is the last shot, April & Daniel are racing, April has a steady lead – it’s a close race, Daniel wins. Daniel & Eric are in ninth place, which means that April & Sarah are the last team and are eliminated from the race.