The Bold and the Beautiful Spoilers: Bill Snaps and Kidnaps Kelly – Refuses to Let Liam Live His Dream with Steffy 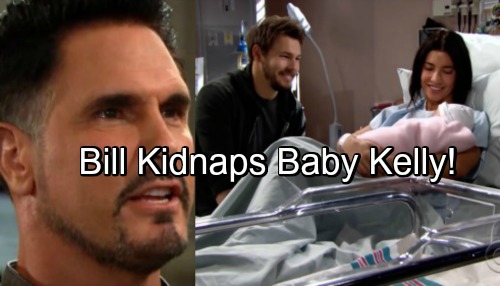 The Bold and the Beautiful (B&B) spoilers tease that Bill (Don Diamont) will get some news that leaves him fuming. Liam (Scott Clifton) and Steffy (Jacqueline MacInnes Wood) are getting back together, so their updates won’t go over well. Bill will undoubtedly keep repeating his mantra. He believes he belongs with Steffy, so he probably won’t give up just yet.

Of course, Steffy will be more furious than ever. Bill’s visit sent her into early labor and his previous manipulation nearly led to “Lope’s” marriage. Liam and Hope (Annika Noelle) would’ve tied the knot if Wyatt (Darin Brooks) hadn’t come clean. Steffy is officially done with Bill, so he’ll have to watch “Steam” rebuild their relationship. Bill will see them as Liam lives the life he wants with Steffy and Kelly.

B&B fans know Bill’s always been ruthless, but he’s really gone off the deep end lately. Bill’s obsession with Steffy is out of control! Once he gets an idea in his head, there’s no stopping him. It’s bad enough when Bill’s fixated on skyscrapers and making money. Now Bill’s focused on a woman who has no interest in him and her family could continue to suffer because of it.

Bill is clearly the villain of The Bold and the Beautiful right now. No one else even comes close to this level of cruel, crazy behavior. Villains tend to get away with a lot, but soaps have to make them pay every once in a while. Bill is long overdue for a good dose of justice.

However, Bill may have to cross the line once more before he goes down. He needs to do something that’s too despicable to escape the consequences. What would fit the bill? A kidnapping plot might be exactly what B&B needs to rev up the drama.

Liam and Steffy will surely do everything they can to keep Bill away from his granddaughter. They’ll also have their happy family on full display. Will Bill snap and kidnap Kelly? Nobody would be surprised! That could spark a search for Gramps and the little one. Bill could finally land behind bars after he got caught.

It’d be nice to see Bill pay the price for a while, but he could toss some cash around and wiggle out of it eventually. There’s even a chance that he could reveal himself as Kelly’s biological father! If a paternity swap went down, that’d be the perfect time for it to come into play.