The Bold and the Beautiful Spoilers: Hot B&B Promo – Bill Pressures Steffy with a Wedding Dress – Zoe Gets a Dangerous Offer

BY Heather Hughes on July 28, 2018 | Comments: one comment
Related : Soap Opera, Spoiler, Television, The Bold and the Beautiful 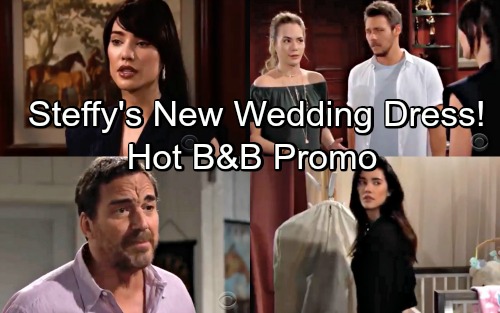 The Bold and the Beautiful (B&B) spoilers for the week of July 30-August 3 tease that some surprises are in store as we see in a hot promo video. For starters, Zoe (Kiara Barnes) could actually make some progress. Xander’s (Adain Bradley) been adamant about keeping Zoe at a distance, but he’ll end up seeking her out soon. He may want to have an honest chat about where they stand and hopefully settle Zoe down.

When Xander stops by Zoe’s apartment, she’ll be rather scantily clad. As Xander stares, Zoe will wonder if he sees something he likes. She’ll pull out all the stops and get her man back! However, Xander’s falling for Emma (Nia Sioux) now. He won’t want Zoe to jeopardize his budding relationship, so he might try a gentler warning.

Xander may admit that he still cares for Zoe deep down. He’ll still probably want Zoe to head back to London, but he might think he can achieve that with this sweeter approach. Xander may insist on being friends from a distance. Regardless, they’ll share a hug before Xander takes off. That’s only going to make Zoe more determined to win him over.

Besides, Thorne (Ingo Rademacher) will have big plans for Zoe this week. The Bold and the Beautiful spoilers say he’ll want her as a model after all. Despite the online threats, Zoe was a real hit at the fashion show. People have probably been clamoring for her online, so Thorne will want to let bygones be bygones. He’ll do whatever he has to do for the sake of the business.

Nevertheless, Thorne will want to make sure Zoe’s sane first. He’ll ask Xander if he thinks she’s dangerous, but he’ll probably say no. As of right now, Zoe’s schemes have been harmless enough. Of course, she could up the ante down the road. No one will be shocked if Emma lands in grave danger.

In the meantime, Bill (Don Diamont) will set up a new nursery for Kelly and score points with Steffy in the process. When she spots something on a hanger, she’ll wonder what it is. That’s when Bill will drop the wedding bomb. He’ll admit that he got a bridal gown for Steffy, so she’ll realize their nuptials are happening fast. Bill will want to tie the knot in the living room immediately!

Over with Ridge (Thorsten Kaye), he’ll tell Liam (Scott Clifton) that this is his worst nightmare. Liam will agree that Steffy’s headed to the dark side, but Ridge won’t think it’s too late to pull her back. He’ll encourage Liam to stop this B&B wedding, but it looks like the plan’s destined for failure.

The Bold and the Beautiful spoilers say Steffy will also make a splash at Forrester Creations. She’ll shock Liam and Hope by doing “what needs to be done.” It seems she’ll be making changes as FC’s new owner. We’ll give you updates as other B&B news emerges. Stay tuned to the CBS soap and don’t forget to check CDL often for the latest Bold and the Beautiful spoilers, updates, and news.