The Bold and the Beautiful Spoilers: Steffy’s Pull Is Too Strong, Liam Can’t Truly Let Go – Hope Set Up for Heartache

BY Marcy Cohen on August 9, 2018 | Comments: one comment
Related : Soap Opera, Spoiler, Television, The Bold and the Beautiful 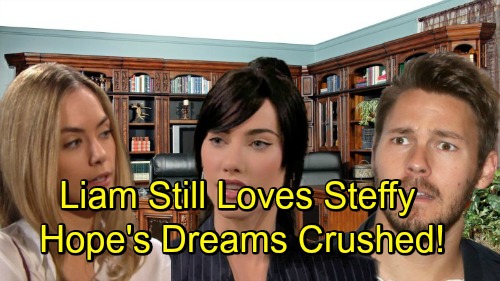 The Bold and the Beautiful (B&B) spoilers tease that Hope (Annika Noelle) will do her best to have faith in Liam (Scott Clifton). She offered him an out after Steffy (Jacqueline MacInnes Wood) shoved that ring on her finger, but Liam didn’t take it. Instead, he decided to recommit and kick off their future together.

Liam is and always has been a waffler. He’s indecisive to the core and there’s a good reason for that. B&B thrives on love triangles, so it’s important for these characters to battle uncertainty. Liam takes it to the extreme, but we can’t blame him too much. Soaps have to keep the revolving relationship door spinning around. Liam’s wishy-washy behavior is an easy way to make that happen.

Alas, that means Hope will inevitably face more sorrow. She’s convinced herself that everything’s going to work out. Hope’s an optimist at heart, so she’ll believe she can have Liam’s baby and build a wonderful family with him.

Even if Hope carries this baby to term and gives birth, that doesn’t guarantee happiness for “Lope.” Steffy had Liam’s kid and it didn’t matter much in terms of his love life. Kelly means a lot to Liam, but he certainly wasn’t putting her first when he ignored Steffy to lock lips with Hope.

What happens when Steffy finds a new man and Liam gets jealous? What about when Steffy’s next relationship ends in disaster? She’ll need someone to pick up the pieces and you can bet it’ll be Liam. By warning Bill (Don Diamont) that Steffy was off-limits, Liam made it clear that he wasn’t done with her. He’s still possessive and envious, so he hasn’t moved on entirely.

The Bold and the Beautiful spoilers say Hope’s setting herself up for trouble. The best she can hope for is probably a couple months of happiness. Hope had better enjoy this reunion while it lasts! It won’t be long until she’s the latest woman to get burned by Mr. Waffles.