The Young and the Restless Spoilers: Devon and Hilary’s Final Hurdle to Happiness – Neil’s Plot Threatens to Tear Them Apart 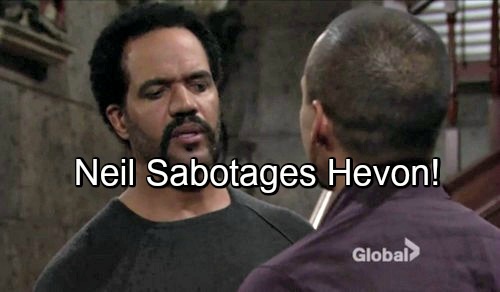 The Young and the Restless (Y&R) spoilers tease that tease things are really looking up for Devon (Bryton James) and Hilary (Mishael Morgan). They’ve got a baby on the way and they’re giving a renewed romance a shot. Devon will even ask Hilary to move in with him soon, so it’s clear that their relationship is back on track.

As Hilary’s pregnancy moves along, it’ll undoubtedly bring Devon even closer. He’s on cloud nine over the idea of being a dad. This whole experience has really reignited Devon and Hilary’s love. Devon recently dropped some hints about that to Neil (Kristoff St. John). He wouldn’t elaborate, but Neil can tell that Hilary’s worming her way back into Devon’s heart.

Since Devon’s determined to be a father, Neil has accepted that Hilary will be involved as the mother of his child. They’re always going to be connected, so there’s no point in fighting it. However, that doesn’t mean Neil wants to see Devon go down the same old road. He knows Hilary tends to bring disappointment and heartache. Neil will hate to see Devon sign on for more of the same.

As a result, The Young and the Restless spoilers say Neil will start plotting. It looks like he’ll scheme to drive Hilary and Devon apart. Neil might try to plant some doubts in Devon’s mind. He may even make Hilary face a few of her own.

Neil’s best bet would be to focus on how a breakup would affect their little one. If this reunion goes south, it could lead to serious conflict and custody drama. Since Nick (Joshua Morrow) and Victor (Eric Braeden) are gearing up for a custody battle over Christian (Jude and Ozzy McGuigen), that’d be the perfect example for Neil to use. Devon and Hilary certainly don’t want to end up in a war like that.

If that doesn’t work, Y&R spoilers say Neil might try a bolder strategy. He’ll do whatever it takes to protect Devon, but this plan will undoubtedly backfire. It appears Neil’s manipulation could be the last major “Hevon” hurdle. He may inadvertently strengthen their bond and propel them into their future together.

The Young and the Restless spoilers say Hilary and Devon will deal with some trouble this summer, but they’ll push through it. They can’t let anything stop the happy family they’re trying to create! We’ll give you updates as other Y&R news comes in. Stay tuned to the CBS soap and don’t forget to check CDL often for the latest Young and the Restless spoilers, updates, and news.