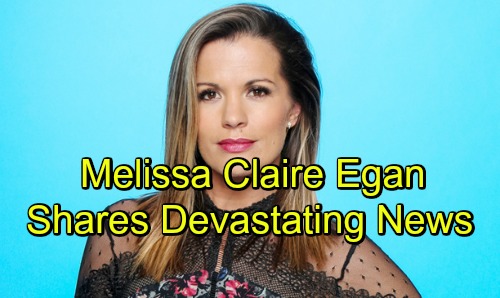 The Young and the Restless (Y&R) spoilers reveal that one CBS soap star is opening up about some devastating news. This Y&R alum wanted to share her story and hopefully help people with similar struggles. Melissa Claire Egan (ex-Chelsea) is certainly missed in Genoa City. Her exit brought major drama, but it turns out she was facing a private battle during her final days on the show.

Egan decided she was ready to speak out about a tough loss. She suffered a miscarriage back in January, which she suggested she’d always been open about with her family and friends. However, the former Young and the Restless actress had never publicly mentioned the ordeal until now.

Since fans out there may be dealing with the same devastation, Egan wanted to do her part to help anyone who’s suffering. Sometimes it’s just helpful to know you’re not alone. On Instagram, Egan posted a photo of herself in a hospital gown. She offered more information on her experience in the caption.

“This picture was taken on January 18, 2018,” Egan said. “My husband took this picture an hour after my D&C surgery, after I had suffered a miscarriage at 8 weeks.” Egan went on to say that the loss was difficult, but she had some very special loved ones to get her through it. She stated that her incredible husband, friends and family members were there for her every step of the way.

Egan also talked about how this loss affected her. “It’s so hard,” Egan admitted. “And takes such a toll on you emotionally and physically, hormonally, all of it.” She added that she hadn’t seen one gal pal in a while, so she faced a shock when they caught up. Egan’s friend delivered news of her miscarriage, which prompted Egan to reveal her own.

The relief she saw in her friend’s eyes really got to her. Egan realized that she could do some good by opening up on a public level. “She told me she had felt alone and like a failure, and less-than, because she hadn’t heard other people speak about it,” Egan said. “This made me SO SAD, and made me want to share my story.”

Egan finished her post with some words of encouragement. She’s hoping that this heartfelt message will give those who are grieving some comfort. “Please don’t feel alone,” Egan said. “Or like a failure. You’re everything, and I’m here with you. Much love.”

This picture was taken on January 18, 2018. My husband took this picture an hour after my D&C surgery, after I had suffered a miscarriage at 8 weeks.