BY Heather Hughes on August 8, 2018 | Comments: one comment
Related : Soap Opera, Spoiler, Television, The Young and the Restless 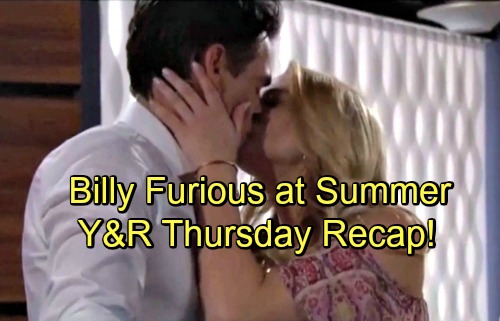 The Young and the Restless (Y&R) spoilers for Thursday, August 9, tease that Neil (Kristoff St. John) will object to Lily’s (Christel Khalil) firing. As Devon’s partner, Neil will stand firmly against the decision. Lily will agree to leave the company if that’s what Devon wants, but he won’t think it’s going to matter. Devon will argue that Lily’s headed to prison, so she won’t need this job anyway.

Cane will point out that he’s already upset, so he doesn’t need Nate’s criticism right now. Nate will soften and push Cane to support Lily. She could really use a rock in this crisis. Later, Cane will embrace his emotional wife. Lily will insist that Devon hates her, but Cane won’t think that’s true deep down.

Afterward, Michael (Christian LeBlanc) will call with terrible news. Lily’s arraignment is set for tomorrow and she’s being charged with two counts of vehicular homicide. The Young and the Restless spoilers say Lily will have a meltdown as she fears what’s ahead. At least Cane will stay right by her side for comfort!

Over with Neil and Nate, they’ll decide it’s time for an intervention. Y&R spoilers state that they’ll corner Devon and try to help him through this. Nate and Neil won’t think this is what Hilary (Mishael Morgan) would’ve wanted. Devon will declare that he’s just seeking justice. He’ll be miffed that Neil’s putting Lily’s feelings first in all of this.

Other Young and the Restless spoilers say Phyllis (Gina Tognoni) and Billy (Jason Thompson) will argue over Jabot. Since Lauren’s (Tracey E. Bergman) irritated over the blow to Fenmore’s, Billy’s latest project has left Phyllis torn. However, Billy will maintain that he’s doing what’s best. He’ll shift the topic to the excitement Phyllis brings to his life, so they’ll kiss and promise to meet up at home.

At The Dive Bar, Summer (Hunter King) will plan on spilling the Jack (Peter Bergman) and Phyllis beans to Billy. Kyle (Michael Mealor) will remind Summer that there’s no evidence, so she’ll decide to get creative. Summer will plant a hidden camera at the apartment and wait for footage of a betrayal.

Once Phyllis walks in, Summer will mention that Jack seemed depressed when she saw him. Later, Summer will tell Jack that Phyllis is distraught and alone. She’ll believe Jack should go take his shot. Jack will indeed head over to Phyllis’ place for a deep conversation. After they open up to each other, Jack will lean in for a kiss. When Phyllis pulls her lips out or reach, Jack will offer an apology and bail.

In Billy’s office, Summer will jump at the chance to massage Billy’s shoulders. She’ll plant a kiss on him as he stands up, but Billy will quickly push her away. The Young and the Restless spoilers say Billy will give Summer a warning. He’ll vow to tell Phyllis what she’s been up to if this keeps up.

Of course, Summer won’t be discouraged. She’ll just keep plotting and hope things work out in her favor. We’ll give you updates as other Y&R details emerge. Stay tuned to the CBS soap and don’t forget to check CDL often for the latest Young and the Restless spoilers, updates, and news.