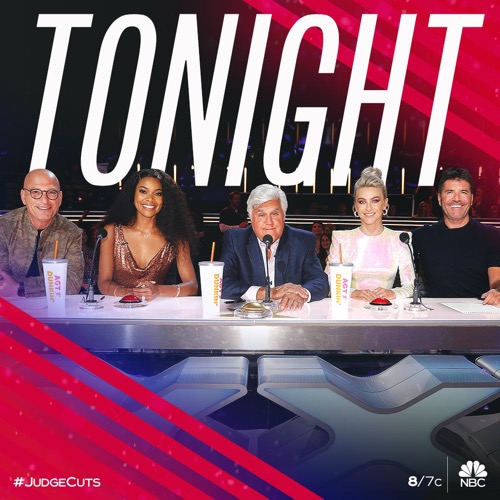 Tonight on NBC America’s Got Talent begins with an all-new Tuesday, August 6, 2019, episode and we have your America’s Got Talent recap below! On tonight’s AGT season 14 episode 11 “Judge Cuts 4″, as per the NBC synopsis, “Jay Leno joins the panel as a guest judge and gets the opportunity to send an act to the live shows with a Golden Buzzer.”

Not everyone was going to make it to the live shows. Most of the acts were actually going to go home after this because there were eighteen acts in all and only sevens spots remaining, but the judges did try to do their best by them. The judges treated everyone with respect and even tonight’s guest judge tried to find something nice to say about each act. Jay Leno has also been through this before. He had plenty of acts coming on his tv show and he knew what to look for if he was going to press that Golden Buzzer.

The first act had been a dog show. There was a whole family that lived with their dogs in an RV and, while not everything went to plan, the judges ended up enjoying the chaos. Like the dogs ran off in every direction. It was therefore pretty surprising when those same dogs came back without any prompting. The family clearly has great control over them and the family was also likable. The judges liked them and the audience liked them. It wasn’t enough for a Golden Buzzer, but it did place them in an encouraging position with the judges.

The second act was a dance group. DM Nation was a dance group from Canada and they were told last time that they lacked emotion. Simon told them they had to bring it the next time he saw them and unfortunately he was again disappointed. The girls tried to put in the emotion. They added bigger lifts and elements of surprise and still, it hadn’t been enough. Simon said there was just a disconnect there and he didn’t think they could win over the crowd with that. The other judges felt differently, but DM Nation never forgot the criticism and it made them anxious about the end of the night.

The third act, however, was a funny one. Ben Trigger was a dancer and he was also on the bigger side. He knew that he didn’t have the typical body of a trained dancer, but he never let that hold them back and instead he found the funnier side of things. He last performed a striptease for the judges and so no one understood why he suddenly said he wanted to do a serious side tonight. He was dancing like the trained dance he was and luckily he then changed his tune. He pulled out Tina Turner and he again pressed the Golden Buzzer for himself. And again it didn’t count.

Then came the singers. The first singer gave an awful audition and so he was forgettable. So then came Jordan Ravi. He was the heartthrob that the ladies in the crowd all loved and so he wanted to prove he was more than his good looks. He got rid of the guitar and was just himself. The ladies still liked loved them because they couldn’t stop themselves, but it didn’t matter so much because Jordan gave a better performance tonight than he did with his audition. The judges had even liked this version of him more and so he didn’t need all that other stuff.

Another artist that wanted to show off his serious side Benicio Bryant. The kid has a great voice and he wanted to show the judges that were more to him than that. Tonight he brought out a guitar and he also sang an original song that was written by him. Benicio wanted everyone to see the side of him that was the awkward kid and he was so shocked when they ended up loving him for himself. The judges ate up his originality. They said they loved this performance tonight more than his audition and, really, everyone knew he would be taking one of those seven spots.

Things later changed up with Victor Moiseev who brought in his horizontal juggling. He added his face paint and gave a live show as well as a juggling act. The judges had never seen that with anyone else but him and so he left an impression. The judges loved his uniqueness and so it came down to whether that would be enough. The acts had to raise the stakes every time they went on stage and no one was sure if Victor could do that with his own act. There was a question about longevity with the judges and so they were really looking for someone to surprise them and they got lucky with the next act.

Marina Mazepa was unlike anything the judges have seen. She was a trained dancer and she incorporated that with her personality. She liked to shock and even scare people, but she really made a name for herself tonight. She frightened everyone and she never once broke character. She wanted people to think she might eat them. She also had the judges leaning back in their seats because they were too scared to look her in the eye. Marina gave a hell of a performance and she showed that there was still she could do. And the judges had loved her for that.

Marina was later followed by Charlotte. Charlotte was the thirteen years old from Spain and she had an accent when she was speaking English, but not when she was singing in English. She was an amazing singer and she brought the soul into her music. So tonight had been a great night for her. Her song selection had been on point and she also had a stage presence. The judges loved her when she was performing and they found sweet that she was so nervous. They even helped her with those nerves by reminding her that she could get that guinea pig if she won the million dollars.

Callie Day had gone next. She was another singer and she wasn’t the typical singer because she was actually older than a lot of people there tonight. Callie also hadn’t been sure if she wanted to come to the show. It took a friend posting a video online of her singing to get Callie to realize how talented she is. Those reviews had meant the world to her and she had been so great at her audition that the judges loved her. They had eagerly waited for her to come on stage again and tonight she picked one of Simon’s favorite gospel songs. She didn’t mean to, but she did and it won over the crowd. Even Jay Leno looked like he wanted to press that Golden Buzzer and so why didn’t he?

There were several magicians that came on afterward and they were all impressive. Only the night soon moved to the comedic portion and so Kara with a “K” came along on what should have been her biggest night, and sadly it was a disappointment. Kara’s audition was so much better because she spent years working on it and so coming up with something on the fly didn’t work out for her. She was all over the place. She didn’t even catch a break when she snatched her own wig and so there was nothing in this act that could be saved.

Emanne Beasha went next and she helped cleanse the palette. She was ten years old and brought her stuffed unicorn to give her some magic, but it must have worked because she gave one of her greatest performance tonight. She was a brilliant opera singer and also there was such an innocence to her. There was something about it that only a child could pull it off. The judges had said as much when they talked about her and Jay Leno was so impressed that he gave her the Golden Buzzer. And so maybe that unicorn was magic!

Eric Chien went next. He was another magician and his audition had blown away the judges. They said he was the best magician they had ever seen and so that was a hard act to top. But he did it! Eric was a great showman and it helped that he was less nervous. It also made him more focused. He impressed the judges with his close-ups. It made them all consider if magic was real and so that was something, but it may not be enough. The close-ups were good for now and that begged question about what will happen later? Will Eric’s act look different if the cameras weren’t there to show the audience what he was doing? Will it be enough then?

Tonight, the judges saw plenty of great acts. It made their decision all the more difficult because they couldn’t pick just seven and each time they turned around they were introduced to another great act. Like the Voices of Service. They were a group of serving men and women who have struggled with coming back home and so their message was just as great as their voices. They were great singers and everyone thanked them for their service as well. It also made left the judges in a predicament. They liked the Voices of Service and at the same time, they had liked all the singers that came out tonight.

Jonathan Burns had tried to wow the judges with his act of putting himself through small holes, but the judges “X” him out. They thought the act was horrible and they weren’t afraid to say so. The judges were done with Jonathan long before he knew it and so it was onto the last act of the night. Jackie Fabulous had been the cherry on top. She was funny and she was willing to poke fun at her Jamaican mother with the woman in the audience. Jackie wasn’t afraid to take risks and they all paid off tonight when she made a prestigious comedian like Jay Leno laugh.

Jackie ended the night with a high note, but then she had to wait like everyone else to find out if it was enough for the judges.

The judges had a certain amount of seats after the Golden Buzzer and so they fought over who they should choose.

And then came to the decision. They chose Voices of Service, Eric Chien, Marina Mazepa, Charlotte, Jackie Fabulous, and Benicio. They along with Emanne will be going to the live shows.