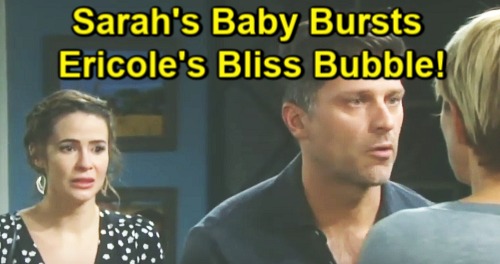 Days of Our Lives (DOOL) spoilers tease that a big moment’s ahead for Eric Brady (Greg Vaughan) and Nicole Walker (Arianne Zucker). DOOL fans know they finally reunited at the farmhouse, so it feels like they’re set to get their happy ending. Of course, happy endings don’t really exist on soaps! It’s just a matter of how happy a couple can stay while drama’s going on around them.

For now, let’s focus on some positivity. Nicole will be a free woman and can return to Salem with Eric. They’ll naturally bring Holly Jonas (Harlow and Scarlett) home with them so they can be a family like they planned. Nicole will be all in on this reunion – even when she learns things are complicated.

Days of Our Lives spoilers say Eric will admit his feelings for Sarah Horton (Linsey Godfrey) and explain how they got together. He’ll want to be honest with Nicole about what happened while she was out of the picture.

However, Eric will likely also admit his feelings for Sarah can’t compete. Even Sarah herself knows that. Eric will never feel for Sarah what he feels for Nicole, and she’s accepted it.

Nicole will be grateful for Eric’s honesty regarding Sarah, but she’ll quickly brush past it. She’ll consider Sarah a non-issue. Nicole knows how deep Eric’s love is, so she won’t view Sarah as serious competition. There’ll obviously be a hint of pain and jealousy of Eric moving on, but Nicole wouldn’t have expected anything different under the circumstances.

Now that Nicole is back, she’ll be excited to make their dream a reality. It seems like Nicole and Eric are always being robbed of their chance at bliss. That could be the case this time as well, but we at least know Eric will officially dump Sarah and move on with Nicole.

Xander Cook May Pose As Baby Daddy But Suspicions Arise

During the week of September 16-20, Days spoilers say Nicole and Eric will enjoy some lovemaking. That’ll definitely bring some long-awaited steaminess! Unfortunately, Sarah’s secret pregnancy will hang like a dark cloud over this relationship. It looks like Xander Cook (Paul Telfer) may pose as the “baby daddy,” but Eric’s bound to be suspicious.

As for Nicole, she may think Eric should leave it alone! Could that lead to some “Ericole” conflict? Days of Our Lives spoilers say some hurdles will hit for this couple. That goes for almost any soap pairing, but maybe Eric and Nicole can survive the storm that’s brewing.

Are you excited to see a new chapter for Nicole and Eric? We’ll give you updates as other Days news comes in. Stay tuned to DOOL and don’t forget to check CDL often for the latest Days of Our Lives spoilers, updates and news.