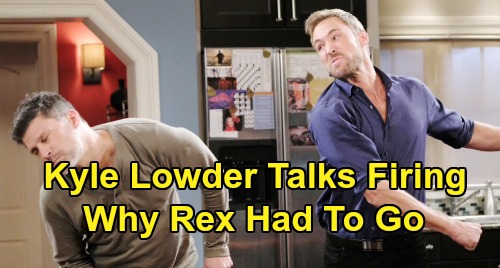 Days of Our Lives (DOOL) spoilers reveal that Kyle Lowder will wrap his run as Rex Brady on Friday, August 9. In an interview with Soap Opera Digest, Lowder reflected on his return to Days and revealed why Rex had to exit. It was certainly a bittersweet experience to make this comeback and not be able to stick around, but Lowder’s grateful for the time he had back on set.

When Lowder first received his departure news in early December, he was fresh off a fun fan event with Eric Martsolf (Brady Black). They’d been greeting enthusiastic DOOL viewers over the weekend, so Lowder had to come down from his high quickly. He was bummed to be called into the production office that Monday morning for his firing.

However, Lowder assured Days of Our Lives fans there were no hard feelings. He understands that business is business, and the updates he received were politely delivered. “It was honestly a very nice conversation,” Lowder admitted. “They said, ‘Look, this is never easy, but we’re undergoing some huge changes with the show and we had to make some tough decisions about which characters are going to stay and which characters are going to go.’”

Obviously, Lowder fit in the “go” category. He was surprised and disappointed since he had so much more he wanted to accomplish with his character. Lowder already faced an uphill battle thanks to some of Rex’s shady behavior. He talked about Rex’s two-timing ways and how he felt about that part of his storyline.

Lowder noted that after Rex fathered a child with his ex, Mimi Lockhart (Farah Fath), he had to think about ways to make the character likable again. Of course, he then found out Rex also cheated with Sarah Brady’s (Linsey Godfrey) sister, Noelle Curtis! That made Rex a serial cheater and added to Lowder’s struggles, but he embraced the challenge.

“I enjoyed it,” Lowder said. “I welcomed it. You want to be challenged in playing a character that you can’t relate to whatsoever. But you want fans to love to hate you, you don’t want them to just like you or hate you and they don’t want to see you on-screen anymore.”

Unfortunately, Lowder never really got a chance to help Rex find a better path. As a result, many fans seem OK with this casting cut. It’s for the best in some ways since it’s freeing us from the love triangle featuring Rex, Sarah and Eric Brady (Greg Vaughan).

Still, it’s a shame to see anyone lose a job! The good news is Lowder bounced back shortly after he finished filming at DOOL. He quickly began working on A Mermaid for Christmas, which he stars and serves as an executive producer on. Lowder also plans to film another movie this month, so he’s staying busy and finding success elsewhere.

Days of Our Lives spoilers say Rex will have some ominous parting words for Sarah later this week. Don’t miss Rex’s warning about Eric’s enduring love for Nicole Walker (Arianne Zucker)! We’ll keep you posted as other Days details emerge. Stick with DOOL and don’t forget to check CDL often for the latest Days of Our Lives spoilers, updates and news.

One more week! Man, this has been fun. So grateful to have returned over the past year to the place where it all started for me, almost two decades ago. This show, and everyone associated with it, both in front of and behind the camera, will always be very special to me. My most sincere and heartfelt appreciation to the powers that be at @nbcdays and @nbc . And of course to all of you, the fans, for your unbridled love and enthusiasm. You remind me every single day of why I truly love what I do. Farewell, and thank you🙏🏻♥️ . 📸: @soapdigest on newsstands now

Always a good day working with these two👌🏻 @mermaidforchristmasmovie 🧜🏻‍♀️🎄