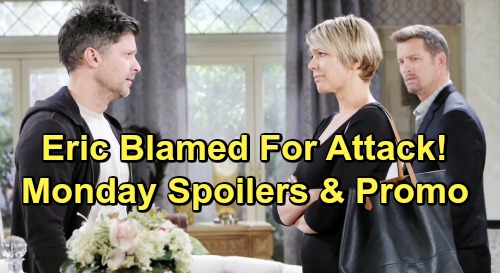 Days of Our Lives (DOOL) spoilers for Monday, June 3, tease that Maggie Kiriakis (Suzanne Rogers) will get support from someone surprising. She’ll make the last friend you’d ever expect thanks to her drinking problem and current vulnerability. Maggie will end up bonding with Xander Cook (Paul Telfer), so that should bring some awkward and amusing moments.

Xander may hope he can manipulate Maggie to make sure she doesn’t spoil his plan with Kristen DiMera (Stacy Haiduk). Of course, Xander could also get Maggie on his side to score points with her daughter, Dr. Sarah Horton (Linsey Godfrey). Maggie may not remain in Xander’s corner once she sobers up, but she’ll definitely bond with him for a bit before they fall asleep on the couch.

Maybe Sarah will walk in on this shocking sight and wonder why in the world these two are so chummy. Whatever the case, Days spoilers say Xander and Sarah’s relationship could get complicated soon enough. In the meantime, Stefan DiMera (Brandon Barash) will explode at Gabi Hernandez (Camila Banus). He’ll rant about losing Chloe Lane (Nadia Bjorlin) and insist that Gabi’s to blame.

Gabi may point out that it takes two to tango. Stefan was responsible for his own behavior, so Gabi may argue that Stefan really has no one to blame but himself. However, Gabi may suggest this is for the best. Days of Our Lives spoilers say she’ll do everything she can to play up their sexual connection and keep Stefan interested. It may take a while to draw Stefan close again, but Gabi will keep at it.

Elsewhere, Jack Deveraux (Matthew Ashford) and Eve Deveraux (Kassie DePaiva) will get on Julie Williams’ (Susan Seaforth Hayes) last nerve. They’ll do something to set her off in Monday’s DOOL episode, so Julie will go off in a big way. Days of Our Lives spoilers say Julie will have an angry meltdown, which should catch Eve and Jack off guard.

Over with Brady Black (Eric Martsolf), he’ll be stunned by the scene he just burst in on. Kristen DiMera (Stacy Haiduk) was in her Nicole Walker (Arianne Zucker) mask when Eric Brady (Greg Vaughan) stopped by to talk. When “Nicole” refused to listen, the struggle led to her tumbling into the table – although Kristen was playing it up a little for drama’s sake.

That trend will continue as “Nicole” whines to Brady. She’ll contend that Eric attacked her, so Brady will feel like his brother needs to go somewhere and cool off. He may not fully believe this was intentional, but Brady will won’t want “Nicole” to feel harassed.

It sounds like some exciting action’s ahead in Salem. We’ll give you updates as other Days news comes in. Stay tuned to DOOL and don’t forget to check CDL often for the latest Days of Our Lives spoilers, updates and news.