Days of Our Lives Spoilers: Sarah Dumps Rex at the Altar, Can’t Marry Without Love – Xander’s Chance to Reignite Passion? 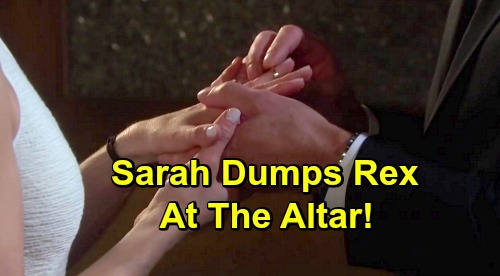 Days of Our Lives (DOOL) spoilers tease that Rex Brady (Kyle Lowder) will drop a bomb on Eric Brady (Greg Vaughan). He’ll reveal that he intends to marry Sarah Horton (Linsey Godfrey) right away, but he won’t want Eric to take wedding photos as planned. Instead, Rex will hope Eric might be willing to officiate the ceremony.

Of course, this should be incredibly awkward since Sarah still has deep feelings for Eric. He has feelings for her as well, but he’s dealing with a lot of “Nicole Walker” (Arianne Zucker) drama right now. Although Eric shared a kiss with Sarah not too long ago, he made it clear that “Nicole” still had his heart. Even if Eric can’t be with “Nicole,” he’s not ready to just pick up where he left off with Sarah.

That may be why Sarah will get on board with Eric officiating. It’ll presumably be Rex’s dumb idea, but Sarah may accept that nothing’s going to happen with Eric and go along with it. Days of Our Lives spoilers say Eric will find it too uncomfortable to reject Rex’s request. If he did, it’d look like he was still pining for Sarah. “Nicole” is the only one Eric’s truly longing for now, so he’ll sign up to officiate.

DOOL spoilers suggest the nuptials may get started, but will they reach a successful conclusion? Based on Sarah and Rex’s disaster of a relationship, it’s doubtful. Rex cheated on Sarah twice, including once with her own sister, Noelle Curtis. The other hookup was with his former flame Mimi Lockhart (Farah Fath), which resulted in the birth of a daughter.

As for Sarah, she’s been focused on Eric for months. It’s clear that her heart just isn’t in this engagement. Sarah’s trying to convince herself she can have a bright future with Rex, but it just isn’t in the cards for them. Days spoilers say Sarah may finally decide the wedding is off – although her timing may be terrible.

Will Sarah stop her vows mid-ceremony? Will having Eric right there in front of her make her see the light? Sarah may turn to Rex before she says “I do” and admit she doesn’t! She can’t promise to spend the rest of her life with Rex. Sarah doesn’t love him like she used to and that’s not going to change.

However, Sarah may assure Eric that she knows where he stands. He wants “Nicole,” who’s currently being impersonated by Kristen DiMera (Stacy Haiduk). Days of Our Lives spoilers say Sarah may choose herself for a while. She really needs to work on some selfcare and let her heart heal.

This could give persistent Xander Cook (Paul Telfer) the opening he needs. Days has been setting Xander and Sarah up as the couple to root for, so maybe sparks will fly again eventually. We’ll give you updates as other DOOL news comes in. Stay tuned to the NBC soap and don’t forget to check CDL often for the latest Days of Our Lives spoilers, updates and news.