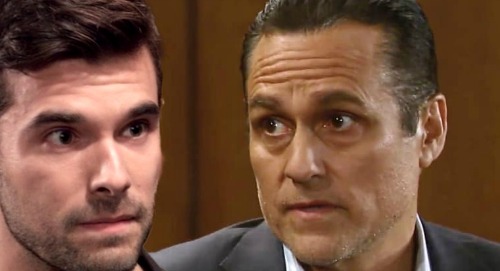 General Hospital (GH) spoilers reveal that Harrison Chase (Josh Swickard) has been fed up with Willow Tait’s (Katelyn MacMullen) incarceration. Sexual predator Shiloh Archer (Coby Ryan McLaughlin) has been running the streets as a free man, so Chase is disheartened by the law he works so hard to uphold.

Chase even told Willow it was enough to make him want to turn in his badge and work for Sonny Corinthos (Maurice Benard). Could that have been GH’s clue about Chase’s future? General Hospital spoilers say it’d be an interesting option to consider.

Michael Corinthos (Chad Duell) will do anything to help Willow and “Wiley Cooper-Jones” (Theo and Erik Olson). He believes Willow is “Wiley’s” mother, and they’ve formed a nice friendship. If Michael felt Chase could protect Willow more easily as Sonny’s minion, he could put in a good word for him. Michael considers Chase a friend as well, so he’d know Sonny could trust him.

Jason Morgan (Steve Burton) also knows Chase is a decent guy who wants to protect his girl. He could certainly convince Sonny to let Chase work for them in the business. Jason could put Chase and Willow in a safehouse if the situation gets ugly. Will something this drastic be necessary? Will Chase really walk away from law enforcement to go on the run with Willow?

GH fans know Willow has become Chase’s priority, so that’s important to remember. Sonny could always use a someone dependable to join his force of bodyguards and lieutenants. Chase would make a great addition to the crew.

How would Willow feel about her boyfriend working for Sonny? Chase told Willow he was joking, but could something happen that makes him change his mind? Would Sonny hire an ex-cop into his organization? Shiloh might kidnap Willow after he realizes the real Wiley is dead. It’s possible Shiloh will demand a replacement child and try to force himself on Willow.

Willow is a grown woman, and a person has to be missing a certain amount of time before the police can get involved. Would that be enough to prompt Chase’s departure from the PCPD? Chase might have to take things into his own hands. He could enlist Michael, Jason and Sonny for his mission to find Willow.

Chase may be kidding right now, but what happens if Shiloh remains a serious threat to Willow? Perhaps Chase will find himself on the wrong side of the law. Could Chase be the one to take Shiloh out once and for all?