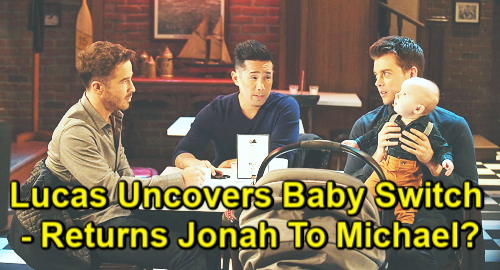 General Hospital (GH) spoilers tease that some twists and turns are coming up in the “Wiley Cooper-Jones” (Erik and Theo Olson) storyline. November sweeps will send the drama soaring and should put several key players in tight spots. Julian Jerome (William deVry) is sabotaging Brad Cooper’s (Parry Shen) relationship with Lucas Jones (Ryan Carnes), but he’ll live to regret it.

Lucas suspects Brad’s keeping something from him – and GH fans know he’s right. Of course, Lucas just seems to think this involves cheating or Brad getting back to his old tricks. He has no idea the truth is so much worse. Lucas has been raising Michael Corinthos’ (Chad Duell) son the entire time, and that shocker’s sure to shake up Port Charles eventually.

However, first thing’s first. General Hospital spoilers say Lucas will discover something else that horrifies him. He’ll learn Julian’s been blackmailing Brad, so that’ll be a double blow. It’ll be troubling that a) Julian would blackmail Lucas’ husband and b) Brad’s got a secret he can be blackmailed with. Lucas will view this as a major setback in both relationships, so he’ll turn to a ghost for guidance.

Lucas’ adoptive father, Tony Jones (Brad Maule), will make an appearance this November. He’ll be back from the dead in spirit form and will undoubtedly deliver good advice. Once Lucas processes his thoughts, he may give Julian a chance to explain himself. Lucas might realize the story’s likely deeper than he understands. He’ll surely want to salvage his relationship with Julian if possible.

Brad will undoubtedly be spinning some tale of his own – most likely one that paints Julian as the bad guy. In reality, Julian’s just fed up over the mess he was dragged into and isn’t handling it well. He’s not going to appreciate it if Brad gets forgiven while he gets pushed away. If Julian stands to lose his spot in Lucas and “Wiley’s” life, he won’t have as much incentive to stay silent.

Julian will want to protect Lucas from a broken heart and avoid Sonny Corinthos’ (Maurice Benard) wrath, but will that be enough to keep him quiet? Lucas will likely be guilt-tripping Julian, so the situation will get tricky. General Hospital spoilers say Julian may be forced to make the toughest choice of his life.

Telling Lucas the truth would fit the bill, and it’d set the stage for some other big reveals. It’d be interesting to put the power in Lucas’ hands. Having Julian spill the beans to Lucas would make matters worse for Brad. This is something Lucas would’ve preferred to hear from Brad himself – although it would’ve been better if he’d never had to hear it at all.

Plus, Julian might let Lucas decide how to move forward. Lucas could be in the driver’s seat when it comes to staying tight-lipped and keeping “Wiley” or coming clean and giving Michael his son back. Since Lucas has a moral compass, it’s hard to imagine him keeping this secret for long.

Will Lucas finally drop the Jonah bomb on Michael? Will “Wiley’s” fill-in dad expose this massive secret? We’ll give you updates as other GH news emerges. Stay tuned to the ABC soap and don’t forget to check CDL often for the latest General Hospital spoilers, updates and news.