General Hospital Spoilers: Violet Parenting Crisis Hits Hard – Anna and Finn Clash Over What to Do, Hayden’s Mess Gets Messier 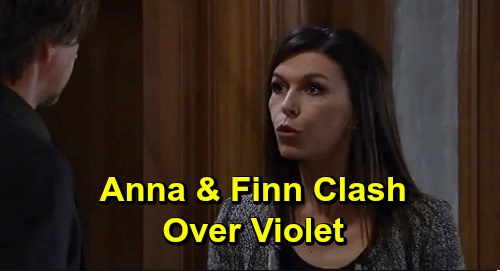 General Hospital (GH) spoilers tease that Hamilton Finn (Michael Easton) has more challenges in his future. GH fans know Hayden Barnes (Rebecca Budig) was tricked into leaving town by Nikolas Cassadine (Marcus Coloma). Jasper “Jax” Jacks (Ingo Rademacher) found out and wanted to make things right, but Hayden’s unreachable and will remain out of her daughter’s life for the time being.

Violet Barnes (Jophielle Love) was quite close to her mom, so her absence could take a toll on her eventually. She’s a pretty happy kid, but it’d be reasonable for her to have some bad days. Violet adores her new dad, but she just doesn’t know Finn the way she knew Hayden. The same goes for Anna Devane (Finola Hughes), who’s being forced to slide into that mother void.

During the week of December 16-20, General Hospital spoilers say Finn and Anna will do some clashing. They won’t see eye to eye on something, which could be related to parenting strategies. This is all new territory for Finn, so he’s bound to have a few struggles. Anna may end up overstepping and sparking some issues for them as a couple.

As sweet as Violet seems to be, no kid is perfect all the time. That’s especially true if a child feels abandoned and has undergone significant changes in her life – like having a dad suddenly enter the picture and do all the parenting. Violet could act out a bit and leave Finn wondering what to do. He’s only had experience dealing with an adorable, agreeable Violet. What happens if the time comes to discipline her?

Anna might even be in a position where she has to do that herself. It’s easy to imagine Anna watching Violet while Finn’s gone and punishing the kid for misbehavior. Finn might flip out and argue that Violet deserves to be cut some slack, but Anna might believe boundaries are the better way to go. This could be a major source of conflict as they try to figure out their new arrangement.