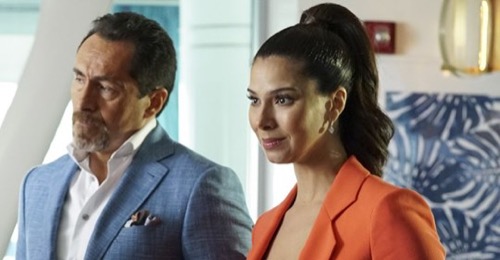 Tonight on ABC, Grand Hotel airs with an all-new episode Monday, July 1, 2019 episode and we have your Grand Hotel recap below. On tonight’s Grand Hotel season 1 episode 3 as per the ABC synopsis, “Danny discovers a new piece of information in Sky’s disappearance; Alicia and Gigi disagree on how to best run the hotel; Gigi gives a glimpse into her mother’s past.”

Danny is on a run when he thinks he sees Sky’s car drive by. He chases it but is struck lightly by another car. The red car gets away.

Javi runs into Ingrid. She tells him she needs $600 for a co-pay she has an appointment today. He tells her he will get the money. He just has to talk to his dad. Helen watches them talk from a distance.

Danny serves the family breakfast, flirting with Alicia while Carolina flirts with him. Santiago shares that he is headed out on a business trip. Javi invites himself. Gigi tries to pull rank on Alicia who doesn’t want to deal with her. Alicia tells her every is going great and she doesn’t need to be micromanaged. ElRay calls Alicia. It’s an emergency. His mother’s pastries she is shipping is not getting to him fast enough. He needs his needs met.

Helen tracks down Mateo. She knows why she isn’t allowed to fire Ingrid. It has to do with Javi. Mateo goes with this theory, even though he is the father of her baby. Mateo returns to his desk to find a blackmail letter involving Ingrid.

Danny sees Alicia in the parking garage. As they talk, he sees the red car and chases it. It’s Ingrid.

Back at work the next day, Jason shares that Sky and Ingrid were roommates. Jason had no idea.

Santiago and Javi meet with some pro ball players they know. Javi has to share that since his accident, he cannot play ball anymore. Feeling guilty, Santiago steps in to talk about how Javi works for him.

Alicia runs into Gigi who is mad about the expenses ElRay is costing them. Alicia daydreams about how her mother used to tell her how they would run the hotel together in the very office she is standing in. She starts to tear up.

Javi bets some of the guys he can slam the ball out of the park. He has trouble on the first two throws but manages to hit the ball hard. Santiago is impressed.

Ingrid meets with Danny and Jason for dinner. Danny asks her about the car and why it has Indiana plates. She says she got it from her grandpa.

After ElRay drives through the lobby on his motorcycle, Gigi questions Alicia about him. Alicia is irritated and doesn’t want to talk. Gigi threatens to suspend her like she would any other employee. Alicia makes a comment that she doesn’t know hoe Gigi and her mother were friends. Gigi says it is because she kept her secrets, shocking Alicia.

Alicia heads to talk to Helen who gets her to calm down and tells her Gigi was just trying to get her going about her mother. Carolina and Yoli tell Alicia they are headed to meet Danny which makes her even more annoyed. Helen thinks Alicia should go. Meanwhile, Gigi takes away ElRay’s pet alligator.

At dinner, Danny finds Sky’s credit card in Ingrid’s purse when she is in the bathroom. They ask her about it. She tells them they were friends and shared things. She hopes Sky will be back. She still has all of her stuff in their apartment. Danny tells Jason on the side that he wants to go there. Jason tells him no. He has kept his secret but this is it. Alicia and Helen show up. Alicia asks Danny to stay for a drink. He agrees.

Mateo finally confronts a guest that was there during the hurricane who has returned. When they end up alone, Mateo draws his gun. The man kisses him. There has been some confusion, Mateo tells the man.

Alicia gets a call from ELRay. He quits. She rushes off, leaving Danny with Carolina. Meanwhile, Javi and Santiago listen to the guys talk about Javi. Santiago no longer wants to deal with them. Telling them to get out of his hotel.

After talking to Gigi, Alicia comes out of the office to see Danny and Carolina entering her room.

Jason walks Ingrid home and comes into her apartment. She hears a noise coming from Sky’s room. Thinking it is Danny, Jason heads in there and is struck in the head.

The next day, Jason punches Danny at work for knocking him out. Danny swears it wasn’t him. He was dropping off Carolina who was drunk.

Javi and Santaigo have a heart to heart. Santiago think Javi is good with sales for the hotel. Javi confesses that he got someone pregnant.

Helen visits with Gigi and tells her to be careful about what she says about Alicia’s mother. They don’t need her asking more questions. Gigi recalls her former best friend having a melt down.