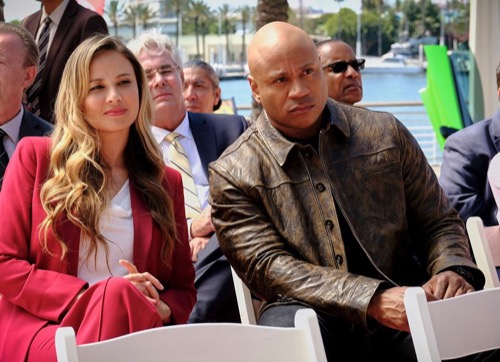 A man was shot at a house party. He was later identified as Andre Vizquel and he wasn’t even invited to the party. He was a Naval Researcher. His current project is an underwater drone and it means great things for the Navy. Especially, once it was up and running. It would be linked with several submarines and used by them to release these drones into waters around the world so this made the project a very big deal. The Department of Defense wanted everything that was happening with it as well as with the people building. And Vizquel has shown some worrying signs.

Before he was shot, Vizquel went to his lab. He removed something from there and he had it on him when he was targeted. It also wasn’t on his persons when he was later found bleeding from a gunshot wound. Vizquel’s health was still precarious when the team got the case and so they weren’t able to ask what he removed. They just knew it was out there. They had to find this object they didn’t understand and protect their Naval position in the Gulf. The team also had to figure out why Vizquel went to the party.

Vizquel didn’t know anyone there. It didn’t seem like his scene because the party was thrown by a social media influencer and he was actually supposed to meet his boyfriend for dinner. His boyfriend Franklyn Shapiro had had a whole night planned for Vizquel. He was going to propose and now he says he’s not sure if he even knew his boyfriend because a lot was coming out of this investigation. Like that party that no one can explain. Vizquel wasn’t seen indoors and the car that sped out of there right afterward hadn’t seemed like anything the influencer’s friends might have driven.

The influencer was Zane Von Bohlen. He made eight figures by playing video games and his party that night had been in celebration of becoming the fact of a hot watch band. Said contract was removed following the shooting. They thought he was unreliable and so he wanted to find the shooter more than NCIS. Zane was so upset he called in Katherine. The same Katherine was the insurer for his Ferraris. Katherine went to the house to check on the cars and she got to say hi to Sam and Callen while she was at it.

There was no correlation between the Ferraris and the case, so Katherine wasn’t interested in what the guys were doing. She merely said her hellos in passing. She went back to her business and they did with theirs. They had gotten security footage from the lab and it wasn’t Vizquel that stole the technology. It turns out it was some guy named Nick Moore. Moore used to work at the labs and he was fired for drinking on the job. The team later found and arrested Moore for the break-in. They even asked about Vizquel.

Moore wasn’t scared as it was. He was honest with them about how it been hard to get a job and that he went into adult videos because he was desperate. He was doing fine there when he was approached about the labs. The people that wanted access to the labs had known his real name and they threatened to reveal it if Moore didn’t play their game. They were also willing to throw in some money as well. So, Moore took their offer. He met with Vizquel for lunch and he used that to steal the man’s badge off of him.

He then broke into the labs where he stole the drone component. Moore said he was directed to a car in Brentwood and that he was told to leave the component under a Ferrari. Sounds familiar. Moore, as it happened, had left this incredible piece to an underwater drone under one of Zane’s Ferraris. He did this because the thieves knew that one the Ferraris were going on sale and figured they could buy the car there. And so this whole scheme was very elaborate and it would have worked if Vizquel hadn’t figured out his keycard was stolen.

Vizquel confronted Moore when he realized his key card was gone. He wanted to know why Moore took it off him and Moore ended up telling him everything. The guy was not strong in the slightest. He told Vizquel what he took and where he hid it. Hence Vizquel went to the party looking for the Ferrari. It’s also where he ran into someone that was watching the car and was in turn shot for trying to steal the component back. Vizquel was now fighting for his life and the Ferrari had been taken to an auction house.

The team needed an invitation to the auction. They, therefore, called upon Katherine to provide them one and she was only able to do it by putting Sam’s car for sale. As long as his car wasn’t sold from out under him, Sam was willing to go with the ruse. He, Callen, and Fatima went to the auction and they watched as the car was bought by Tarpena Joyce. Joyce was a cover. She was a hacker for hire and she had been bought by Russia. She tried to hack the drone and when she couldn’t turn to Moore.

Tarpena also received help from her watcher friend. She had him keep an eye on the car and he tried to when Vizquel got in the way. Her friend shot Viquel, but then he was later killed and so it looks like the Russians double-crossed Tarpena. The FSB team had killed her guy and she was their link to their crime. They went to auction and kidnapped Tarpena by gunpoint. The team was under heavy fire and so it took them some time to get free much less follow Tarpena. She was carrying the component with her and that meant finding her was important to National Security.

And so the team split up. Callen and Fatima dealt with the FSB agents and meanwhile, Sam went with Katherine to go after the component. They were able to track it down as well as save Tarpena’s life. So, the team did go to work on this case. They saved the tech and they cleared Vizquel’s name. His boyfriend still had several questions, but that’s up to him and Vizquel to figure out.

And this was going to be the last the team sees Fatima for a while because she was talked into a trip with Hetty and that could literally mean anything.