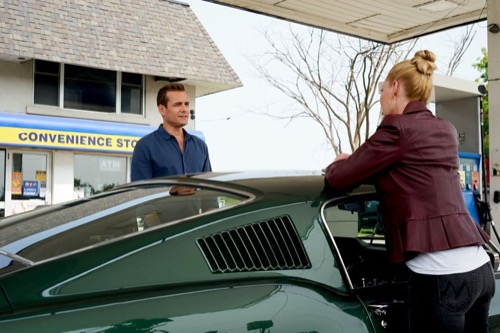 Tonight on the USA Network their critically acclaimed drama, Suits returns with an all-new Wednesday, September 4, 2019, episode and we have your Suits recap below. On tonight’s Suits season, 9 episode 7, “Scenic Route”, as per the USA Network synopsis, “Harvey and Samantha go on a road trip. Louis gets in over his head with a potential client.”

Harvey asks Donna if she is okay with him going with Samantha to meet her biological parents. She is fine. She thinks he is the man for the job. He can relate. Meanwhile, Louis sits in Harvey’s office enjoying the place since Harvey is gone for 2 days. The phone rings. It is a man named Ted. Louis pretends to be Harvey. He gets invited to lunch and can’t turn it down.

Harvey picks up Sam in a car he rented, one that brings back memories for her. When she was a kid one of her foster dad’s exploded on her and another foster boy after they broke his tail light.

Louis comes in to see Donna. He has a wig on. She freaks out. He tells her he needs to look like Harvey and he plans to sign Ted Turner. After he makes his plea, she tells him one lunch and he is done being Harvey.

Louis arrives to his lunch as Mr. Specter. All of the ladies look his way. He enjoys the limelight. At lunch, he is treated like royalty, drinking the best champagne and being fawned over. They all laugh at his jokes.

Samantha recalls stealing her step dad’s car that night. She got pulled over for the tail light.Years later, she remembers telling her coworker the story. He hits on her after. Later, they get into a relationship.

Louis returns back to the office. He is thrilled about his lunch. Donna tells him to pull it together. He cannot do this charade anymore.

Samantha and Harvey continue to drive. She wants to get there soon.

Louis works to turn around his mess, telling Harold that Harvey doesn’t want the deal. Harold calls Harvey and rats out Louis. Harvey heads back to the car and tells Samantha about Louis has been up to. He laughs at it. Samantha is surprised. They get to talking. He admits he slept with Louis’ sister once and they fought.

Louis is freaking out. What would Harvey do, he asks himself.

Samantha and Harvey prank Louis, pretending to be Harold’s secretary. They freak him out and then laugh. Harvey tells him he needs to come clean and face the music. Louis agrees.

Alex heads to see Katrina for help with a favor Donna asked him.

Harvey and Sam blow a tire. There is no jack. Sam gets angry. Meanwhile, Louis meets with Harold and gets him to agree to let Louis pretend to be Harvey.

Samantha recalls a fight with her boyfriend. He tells her he wants to leave his wife and kids for her. She doesn’t want that. She breaks it off with him. She tells Harvey. They talk about their childhoods.

Harold changes his mind but then asks Louis if he can come back to the firm. If he can, he will go along with the charade.

Samantha tells Harvey she is scared. Later, they arrive. He waits in the car while she heads to meet her real dad. She discovers he never knew she existed. He wished he did. She always learns her mom died when she was 2. No-one gave her up after all.

Alex brings Donna the art she asked for. Its a gift for Harvey. Later, he arrives home to Donna and her present. She gave him a painting that reminded him of his childhood. He gets emotional. She fives him space to call his mom. They talk, he admits some things he was mad about in the past.