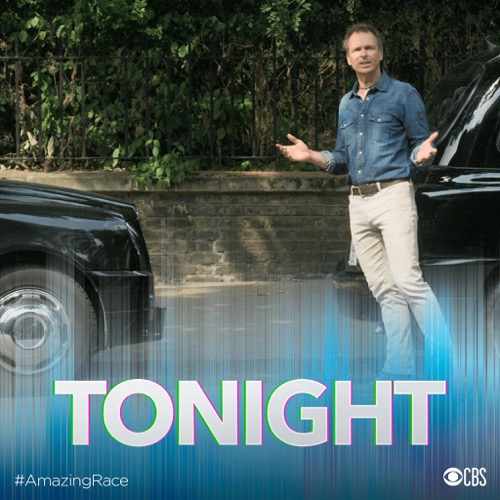 Tonight the CBS series The Amazing Race airs with an all-new Wednesday, June 26, 2019, season 31 episodes 11 and 12 finale and we have your The Amazing Race recap below. On tonight’s season 31 finale episodes 11 & 12 called, “This One is for One Million Dollars Part 1 & 2” as per the CBS synopsis, “With $1 million on the line, the final 4 teams race through London and Detroit on the quest to cross the final finish line first.”

Tonight one of the four remaining teams will win Amazing Race. Colin & Christie are the first team to depart and they are flying to London, England. They will find their next clue at Gatwick Aviation Museum. Tyler & Korey are the second team to depart, Christie thinks it will be fun to race with them and Leo & Jamal. Leo & Jamal are the third team to depart, Nicole & Victor are number four. At the airport, Victor will not even look at Leo & Jamal who are very happy to go back to London, and hopefully, get redemption this time. All four teams are on the same flight.

Once in London, teams try to get taxis. Leo & Jamal quickly find out that there is a booth where you have to book your taxi, it is illegal to hail them down. Next, teams will have to take a scenic helicopter ride over the English countryside, before arriving at Dover Castle. Leo & Jamal are leading, they are the first team in the helicopter.

Next, it’s a Roadblock, “who can’t keep a secret.” Teams will have to crack a code and type it out on an old typewriter. Step 1 they have to listen to a speech for clues. Step 2 you have to get the numbers from the clue to get the code.

Leo & Jamal have finished their Roadblock and must head to London by helicopter to the river Thames.

Victor is finished, without anyone’s help. Korey finishes after him and Christie is having problems, he leaves on her and doesn’t help her. Christie tries and submits her answer, it is wrong.

Next, its a Detour. Teams must choose between “Know” and “Row.” In “Know” teams will have to memorize a cab route, one turn at a time under the watchful eye of the master of cab drivers. In “Row” teams will learn from Olympic medal winners how to row a two-person skit, they will need to finish a 200-meter course in one minute.

Christie is still trying to figure out the code, she starts from the beginning and everything comes together. In the helicopter, Christie is crying and Colin is trying to keep her spirits up.

Leo & Jamal decide to row. The moment they got into the water, they became super unstable and decide to go do Know. Both Nicole & Victor, Tyler & Korey, decide to Row.

Leo & Jamal are in trouble, they are having a hard time doing the other detour. Meanwhile, Nicole & Victor have lopsided over into the water, Tyler & Korey as well. Colin & Christie are catching up with the other teams because of the difficulty with these two detours. Nicole & Victor are doing better, they are not giving up, while Tyler & Korey are back in the water. Colin & Christie are the next team to flip over in the water.

Tyler & Korey head to the other detour, along with Nicole & Victor. Both detours are hard and at this point, it will be anyone’s game to finish in the top three.

Leo & Jamal complete the detour and head to the Pit Stop in Camden Market. Tyler & Korey are the next to finish the detour.

Leo & Jamal are the first team to arrive at the Pit Stop and are overjoyed to be team number one, until Phil gives them thier next clue and tells them that they have to find a few items around the market. They have to read their clue, then rip it, and go find the items. They must find; trunk with a mannequin, a lamp, a drum, a corset, a rug, a camera, boots and a teakettle – then they can check it with Phil.

Tyler & Korey are next, they are also shocked that they have to find items before they can check in.

Colin & Christie finish the rowing with 1 second to spare. Nicole & Victor finish the detour as well and are rushing to the market.

Nicole & Victor are the last team to arrive at the market.

The final three teams must now fly from London, England to Detroit, Michigan. After touching down, teams must find the spirit of Detroit, where they will find their next clue. Tyler & Korey have an advantage, they have been to Detroit many times. Teams have landed and everyone is trying to get a taxi. Leo & Jamal arrive first, its a Roadblock, “who is good with numbers.” Teams must fast forward repel down the Guardian building, a 500-foot building, while they must look out a series of numbers that is the combination to open up a massive bank vault.

Colin takes his time and he is the first one to open the vault and get his next clue. Teams must now play to rounds of fowling in the Fowling warehouse. It is a combination of bowling and football; all they have to do is knock down the pins to get their next clue.

Colin & Christie slow down a bit because they have trouble finding their cab, which gives Tyler & Korey a lead, they arrive at the Fowling first. Meanwhile, Jamal is really worried because they were the first team to arrive to propel and Leo has yet to come out of the vault with their next clue.

Colin & Christie arrive at Fowling and they are doing well, but Tyler & Korey just finished and got their next clue. Teams have to proceed to Third Man records and produce five perfect two-tone records to receive their next clue.

Leo slows down but still has no success in opening the vault. Meanwhile, Tyler & Korey have arrived at Third Man Records; they start and turn around to see Colin & Christie walk in.

After sitting down and meditating, Leo finally figures out how to open the vault.

Colin & Christie do all five records quickly and get their next clue; they must travel by taxi to Hart Plaza and search the musicians for their next clue. Tyler & Korey have fallen behind because, in their first try, they only did two out of five records correctly and had to do it a second time.

Colin & Christie are the first team to arrive and win the Amazing Race.

Tyler & Korey are the second team to arrive at the finish line. Leo & Jamal are in third place and hold the record with 34 legs and 30 U-Turns.