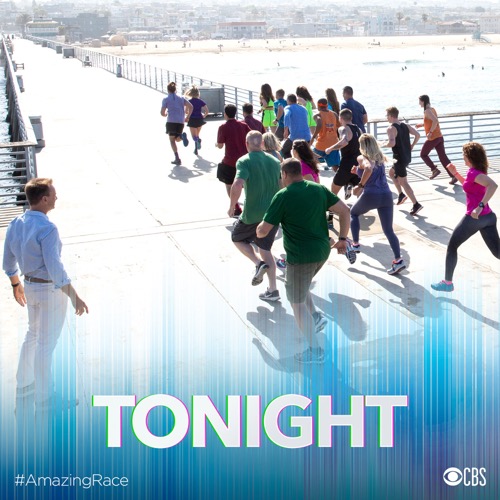 Tonight the CBS series The Amazing Race airs with an all-new Wednesday, April 17, 2018, season 31 episode 1 and we have 1your The Amazing Race recap below. On tonight’s season 31 episode 1 called,“You’re in Our Race Now” as per the CBS synopsis, “The Emmy Award-winning THE AMAZING RACE returns with the first reality showdown among some of the most memorable and competitive players from THE AMAZING RACE, SURVIVOR and BIG BROTHER, premiering Wednesday, April 17 (9:00-10:00 PM, ET/PT) on the CBS Television Network. The 11 teams will compete on the 25,000+ mile journey around the world to be crowned winners of the $1 million prize.”

The Amazing Race began on a legendary beach in Los Angeles. The contestants this year we’re going to start their run on the edge of the world and so its good things this season was comprised of competitors from three of CBS’s biggest shows. The alumni from Survivor, Big Brother, and even the Amazing Race were back to prove that they still got it. The Big Brother teams were Janelle Pierzina with Britney Haynes, Nicole Franzel with her fiancée Victor Arroyo and no saw that one coming, and Rachel Reilly with her sister Elissa Slater. From the Survivor teams, there was Chris Hammons with Bret LaBelle, Corinne Kaplan with Eliza Orlins, and Rupert Boneham with his wife Laura. And there were the teams from previous seasons of Amazing Race.

The returning alum was Arturo Velez with John James Carrell, Colin Guin with his life partner Christie Woods, Leo Temory with his cousin Jamal Zadran, Rebecca Droz with Floyd Pierce, and Tyler Oakley with Korey Kuhl. Therefore, there was more than just friendship on the line. These times were spouses and relatives as well as the odd couple here and there. They now have to spend several weeks together finding clues and so they wished all the best before they went on to the first task. The first task was a sand sculpture of an octopus. The teams had to dig through the sand to find the clue and from there they had to go to the airport because as tt turns out the dig was the easiest part.

After they find an obscure clue, they had to get to the airport where they boarded a flight to Tokyo Japan. They then had to could go to either two locations. Both of which were in the busiest part of Tokyo because that was the shopping district and so from where they had to get their next clue. There was only a certain amount of clues and that meant the teams had to get there first or risked getting lost in Japan. The team in the lead was Leo and Jamal. They got to the clue first and learned that they next had to travel to a certain store where they got to play it is a shoe or it is chocolate. The chocolate one was holding the clue and so the teams had to bite down on a lot of wood before they could find the chocolate.

Again, Jamal and Leo were in the lead. They found the chocolate first and were soon onto their next clue. The team that came in second varied because before the shoe test it was Christi and Colin and after the test, it was Britney and Janelle. Janelle was the only person to get the chocolate shoe right on the first pick and so that gave their team the lead but then they got lost on their way to the next clue. The next clue required them climbing a mountain in a onesie and sliding down this very wet mountain. This was how Colin and Christi regained their position in second. They went down that mountain not long after Leo and Jamal and so that’s when they received their final clue for tonight’s episode.

They were told to a shrine for their final leg of the journey and whoever made it there last would be the team that’s automatically eliminated. There were several teams that came and went through the mountain challenge, but it had been Corrine and Eliza that started this race bragging. They said they had lived through Survivor and this race was going to be a cake walk. They even told each other that it would be Rupert and Laura going home first because the couple was older than them and so it was embarrassing when Rupert and Laura found the chocolate shoe first. They left the ladies in their dust. The ladies began panicking because they thought they in dead last and so they were already in tears by the time they made it to the mountain.

The mountain wasn’t even the last step. It was second to last and while others were worrying for nothing there were several teams that made it to the shrine. Tyler and Korey had been third while Rachel and Elissa had been fourth. So after a while, it just became a list of winners at the shrine. Like sure there were a couple of teams that struggled to get up a slippery albeit fake mountain but the team that was coming in last was Art and JJ. They were the last to clue in downtown Tokyo, last to grab a chocolate shoe, and Art couldn’t make it up that mountain for life of him. He struggled and then had to take a breather because he got a cramp. And so as he was withering on the floor in pain, his friend couldn’t help saying that this was embarrassing.

But luckily they were not last to the mountain. Art and JJ took a four penalty and they were waiting off by the side when Rupert and Laura finally showed. The two of them had gotten lost and so unless they failed at climbing the mountain there was no shot for Art and JJ. The guys watched as Rupert pushed himself up that mountain and they knew it was over when Rupert pulled off what Art said was impossible.

And so it was Art and JJ that was later eliminated from the race.