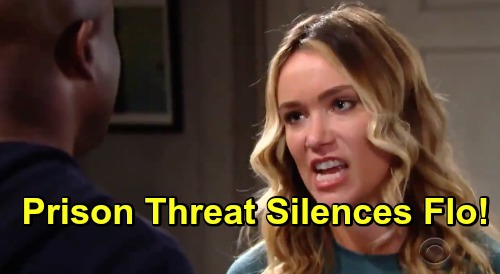 The Bold and the Beautiful spoilers tease that Reese Buckingham (Wayne Brady) and Florence “Flo” Fulton (Katrina Bowden) are headed for a major fight. Zoe Buckingham (Kiara Barnes) has been doing her best to keep Flo under wraps and complicit in keeping the baby swap and adoption scam a secret, but it’s getting harder by the day.

Zoe was absolutely horrified to learn that Flo had been mingling with Hope Spencer (Annika Noelle) and Liam Spencer (Scott Clifton) at Wyatt Spencer’s (Darin Brooks) place. The last thing that Zoe and Reese need is for Flo – who already feels like she should confess the whole truth – hanging around Hope and feeling guiltier than she already does.

Zoe will soon see that Flo is a ticking time bomb, especially since she’s going to be continually bumping into Hope now that she’s reconnected with her old flame Wyatt. The only real solution seems to be for Flo to leave Los Angeles completely, but she doesn’t want to go, and of course Zoe can’t force her to leave.

Since Flo is getting to be more than Zoe can handle by herself, it looks like she’ll call in the big guns and summon Reese back to Los Angeles. The new B&B promo shows Reese angrily interacting with Flo and Zoe in his apartment, telling them both that he doesn’t want any of them to go to jail.

But Flo will remain defiant and certain that Hope should be told the truth about her baby. She’ll tell Reese that Hope will ultimately find out that her baby is still alive, and that there is nothing that Reese can do to stop her. Reese will be desperate at this point, so he may make some threats of his own.

He’ll probably tell Flo that if he goes down, he’s taking her with him – and nobody wants to go to prison. Of course, Flo wasn’t involved in the actual kidnapping of baby “Phoebe Forrester” (Isabella de Armas and Redford Prindiville) from Hope. Flo came into the picture later. But Reese could threaten to claim that Flo was involved from the very beginning if she spills the truth. That would make the situation worse for Flo.

It certainly seems like Reese will do or say something that will make Flo reconsider her desire to come clean, as she’s shown having a breakdown and flinging the items on her desk across the room in a fit of rage. Whatever Reese says will really get to Flo and will likely make the deception continue for the time being.

How do you think Reese will get Flo to keep on keeping the secret? Stay tuned to the CBS soap and don’t forget to check CDL often for the latest Bold and the Beautiful spoilers, updates, and news.