The Bold and the Beautiful Spoilers: Hope Fights Against Steffy and Beth’s Renewed Bond – Liam Objects to Wife’s Selfish Move 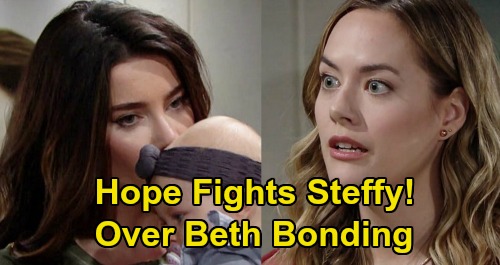 The Bold and the Beautiful (B&B) spoilers tease that Hope Logan (Annika Noelle) has some setbacks in her future. B&B fans know Hope formed a deep bond with Douglas Forrester (Henry Joseph Samiri) after Caroline Spencer (Linsey Godfrey) passed away. Being a mother to Douglas was the main reason Hope was even willing to marry Thomas Forrester (Matthew Atkinson).

Once Thomas’ dark side was exposed, Hope became even more protective of Douglas. The fact that he was Hope and Liam Spencer’s (Scott Clifton) hero matters, too. Douglas helped them realize “Phoebe Forrester” was actually Beth Spencer (River Davidson and Madeline Valdez), so they owe the kid big time. There’s a lot of love in their hearts for Douglas, so that’ll set up the custody fight ahead.

Of course, taking a child away from his father is a serious decision. When Hope tells Liam they need to give Douglas a permanent home, they may face some conflict. This is a choice that they need to discuss at length before rushing into.

However, Hope will rush into it anyway with Brooke Forrester’s (Katherine Kelly Lang) help. After Thomas finds out what’s going on, he’ll insist he’s not signing anything. Thomas will fight just as hard to keep his son, and Ridge Forrester (Thorsten Kaye) will back him up.

Next, Hope will try another strategy. Since Thomas won’t give Hope and Liam full custody, she’ll try to get joint custody. The Bold and the Beautiful spoilers say Hope will deal with some resistance on that plan, too. Meanwhile, Steffy Forrester (Jacqueline MacInnes Wood) will strengthen her bond with Beth once again. Liam will drop by on Halloween with the baby, so they’ll all get some fun family moments.

Steffy, Liam, Beth and Kelly Spencer (Zoe Pennington) will connect while Hope’s throwing herself into this Douglas fight. What happens if that fight proves futile? Hope will be crushed if she loses Douglas, especially since Thomas may want to keep his son away from her. The fact that Hope fought so hard for custody is bound to leave Thomas bitter.

Once Hope’s out of luck, she’ll need something else to focus on. That could end up being Beth and this renewed connection with Steffy. There’s a good chance Hope will become increasingly uncomfortable with it. She may lay down the law and try to keep Beth from Steffy – at least for the most part. It could drive a real wedge between Liam and Hope since he’s promised to keep Beth in Steffy’s life.