The Bold and the Beautiful Spoilers: Liam Fights Hard for His Marriage, But Is ‘Lope’ Really Worth Saving?

BY Heather Hughes on May 7, 2019 | Comments: one comment
Related : Soap Opera, Spoiler, Television, The Bold and the Beautiful 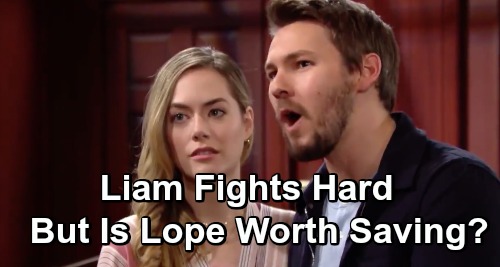 The Bold and the Beautiful (B&B) spoilers tease that Liam Spencer (Scott Clifton) will work hard to protect his marriage. Of course, Thomas Forrester (Matthew Atkinson) will be working just as hard to tear it apart! Don’t think for one second that Thomas is going to back down. Thomas is clearly obsessed with Hope Spencer (Annika Noelle), so there’s no way he’ll back off because Liam tells him to.

If anything, Liam’s resistance will only make Thomas more determined. Thomas has always been the kind of guy who likes the chase. Part of him seems to like the high that comes with winning a woman over. Hope deserves better than Thomas, but Liam may not be the right match either. What’s Liam fighting for really? Is “Lope” truly worth saving?

We completely understand why Liam’s protective of Hope’s heart right now. She was devastated over losing Beth Spencer, so it’s been a real struggle to move forward. It makes sense that Liam doesn’t want Hope to feel abandoned or experience more change. He doesn’t want sneaky Thomas sinking his claws into Hope either, which is also totally understandable.

At the same time, Liam and Hope aren’t really a sizzling pairing. They’re sweet and cute in a way, but where’s the fire? That’s what many B&B fans want! Plus, how Liam and Hope got back together was a real problem this time around. The writing wasn’t the greatest for them during that messy Bold and the Beautiful reunion.

It’s tough to believe Liam and Hope would’ve stuck together if it hadn’t been for their baby, so maybe it’s time to start thinking about a divorce. That doesn’t mean Hope should necessarily choose Thomas, but it does mean Liam should probably be honest with himself.

Deep down, there’s a good chance Liam’s staying with Hope out of obligation. We don’t doubt that Liam loves Hope, but is he IN love with her? There’s a big difference. Liam’s heart may still belong to Steffy, so we have to wonder if “Steam” is the way to go.

Should Liam give up the fight and part ways with Hope? Would freedom be good for both of them? The Bold and the Beautiful spoilers say even more drama’s ahead, so stay tuned. We’ll give you updates as other B&B news comes in. Stick with the CBS soap and don’t forget to check CDL often for the latest Bold and the Beautiful spoilers, updates, and news.