The Bold and the Beautiful Spoilers: Steffy Confesses Major Liam Secret to Sally – Gets Advice About the Future She Wants

BY Heather Hughes on December 15, 2019 | Comments: one comment
Related : Soap Opera, Spoiler, Television, The Bold and the Beautiful 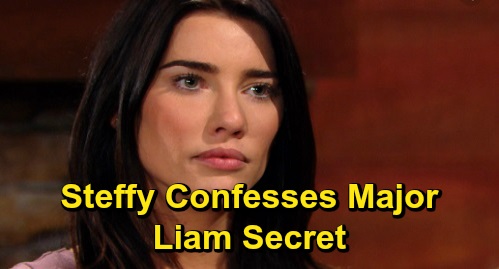 The Bold and the Beautiful (B&B) spoilers tease that Steffy Forrester (Jacqueline MacInnes Wood) will appreciate having some help during the upcoming fashion battle. She’ll be going head to head with Hope Logan’s (Annika Noelle) line, so she’ll definitely want to pull off a win. Steffy would be lying if she said their history wasn’t coming into play a little bit. She’ll want to see the look on Hope’s face when she crushes her in the competition, but she can’t get overconfident and blow this!

Thomas Forrester (Matthew Atkinson) has made plenty of mistakes and has many more to come, but that doesn’t change his talent. Steffy knows Thomas is an excellent designer, so she’ll need to bring her best work to the table. She’ll realize Thomas and Hope are going to make a dynamic duo, but she’ll form one of her own thanks to her partnership with Sally Spectra (Courtney Hope).

Sally has a flair for unique styles, so The Bold and the Beautiful spoilers say she’ll bring a fresh and interesting perspective. However, it seems Sally could end up bringing even more than that. She’ll likely bond with Steffy and become more of a friend, too.

That’s great news since B&B could always use more friendships. Romances are never in short supply, and sibling bonds are often easy to find as well. Unfortunately, it’s rare to see true gal pals confiding in each other, so Sally and Steffy’s growing connection will be a welcome one.

During the week of December 23-27, Steffy will open up to Sally about something she’s been keeping to herself. It should be nice for Steffy to get this secret off her chest. Perhaps Sally can even offer some advice when she’s done listening to Steffy’s confession.

It turns out this confession will involve – surprise, surprise – Liam Spencer (Scott Clifton)! There’s a good chance Steffy will admit she’s still deeply in love with Liam. She may even divulge that she desperately wants him back.

Will Sally urge Steffy to hold out hope for the “Steam” future she wants? Could this make Sally wary of Wyatt Spencer (Darin Brooks) drifting toward his ex-lover, “Flo” Fulton (Katrina Bowden)? The Bold and the Beautiful spoilers say love will remain complicated, so stay tuned for some hot drama. We’ll give you updates as other B&B details emerge. Stick with the CBS soap and don’t forget to check CDL often Bold and the Beautiful spoilers, updates and news.