The Bold and the Beautiful Spoilers: Thursday, May 30 – Liam and Hope’s Final Evening As A Couple – Flo & Zoe Freak Over Lope Split

BY hellodrdavis on May 29, 2019 | Comments: 2 comments
Related : Soap Opera, Spoiler, Television, The Bold and the Beautiful 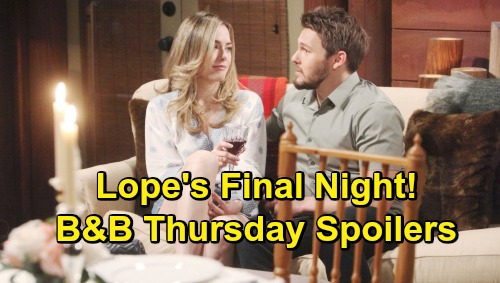 The Bold and the Beautiful spoilers for Thursday, May 30, tease that Liam Spencer (Scott Clifton) and Hope Spencer (Annika Noelle) will spend some touching final moments together. Together in the cabin, they’ve just considered the life they might have had with their daughter, had she survived on that fateful night on Catalina Island. Hope and Liam are both heartbroken over the tragedy, and Hope especially is distraught.

According to B&B spoilers, Liam will set out to lighten the mood a bit. He knows that he can’t stop Hope from ending their marriage, as she’s bound and determined to do so. But he’ll feel like he can at least help them to end things on the best possible terms. Things may not be ideal, but at least they can let each other go under positive circumstances.

So, Liam will arrange a romantic dinner for himself and Hope at the cabin, where he’ll hope they’ll spend their final evening as a married couple in peace and simply enjoying each other’s company. He’ll go to great lengths to arrange the evening, and Hope will be truly touched by his efforts. B&B viewers should see some touching scenes as their relationship comes to an end.

Meanwhile, on the new episode of B&B on Thursday, May 30, Florence “Flo” Fulton (Katrina Bowden) will reel from the news Lope’s split. She was horrified to hear from Wyatt Spencer (Darin Brooks) that Hope had decided to end her marriage to Liam. As B&B viewers know, Flo feels responsible for the split, since she’s keeping the baby swap secret.

Flo knows that if Hope and Liam knew their daughter was alive, then they wouldn’t be on the path to getting a divorce. On Thursday’s episode, look for Flo to suffer great angst and consult with Zoe Buckingham (Kiara Barnes), who’s also in on the baby swap secret.

Flo and Zoe will argue over the whole ordeal, with Flo wanting to come clean and Zoe putting forth all of the reasons why they should continue to keep the secret. Look for the women to consider all the pros and cons of coming clean to Hope and Liam. They’ll both want to help save Hope’s marriage, but the costs of revealing the truth at this point are just too high.