The Bold and the Beautiful Spoilers: Wednesday, May 15 – Shauna Agrees To Seduce Bill – Justin Shocked By Bill’s Announcement

BY hellodrdavis on May 14, 2019 | Comments: one comment
Related : Soap Opera, Spoiler, Television, The Bold and the Beautiful 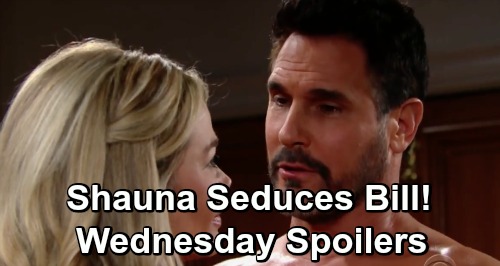 The Bold and the Beautiful spoilers for Wednesday, May 15, tease that Shauna Fulton (Denise Richards) will give Katie Logan’s (Heather Tom) proposal some thought. Katie’s just asked her to try to seduce Bill Spencer (Don Diamont) to see if he’ll take the bait or not. As B&B viewers know, Katie would like to accept Bill’s marriage proposal, but she wants to make sure he’s truly committed to her and Will Spencer (Finnegan George) first.

As it turns out, Shauna will be in for the ride, so she and Katie will start planning their strategy. Katie knows that Bill will be alone at his mansion since Will is at a sleepover, so she figures it’s the perfect time for Shauna to head on over to Bill’s and put the moves on him.

It looks like Katie will plan to wear an earpiece and listen in to the whole exchange from afar, as Shauna approaches Bill and swoops in with her best seduction routine. Of course, Katie will plan all of this despite some serious protests from Brooke Forrester (Katherine Kelly Lang), who will worry that things might not go the way Katie wishes they would.

But then again, the whole point of the exercise will be for Katie to see how Bill reacts, so she’ll know that the outcome could go either way. She’ll just put the plan in motion with Shauna and hope for the best.

Meanwhile, on Wednesday’s new episode of B&B, May 15, Bill will surprise his right-hand man and pal Justin Barber (Aaron D. Spears). Before things get rolling with Shauna’s big visit, Bill and Justin will spend some time together having drinks and conversation.

According to B&B spoilers, Bill will stun Justin with new information about “Sky,” the multi-million-dollar skyscraper that Bill’s dreamed of building for some time. Perhaps Bill will decide to scrap the project or slow down in his efforts to create the building. We’ll see exactly what the shocking news is, but it certainly looks like Bill may be re-thinking the wisdom of building a monument of wealth and status.

In fact, B&B spoilers indicate that Bill will share some of his new views on money and fortune, namely that these things won’t help him get his family back. Perhaps his priorities have really shifted from money and status to family, and Bill will decide to focus his efforts primarily on his family.