The Bold and the Beautiful Spoilers: Week of February 25 – Heartbreaking Bombshells, Stunning Discoveries and Brutal Blows 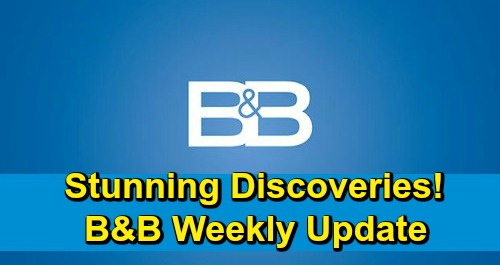 The Bold and the Beautiful (B&B) spoilers for the week of February 25-March 1 tease that we’ll see some painful moments. For starters, Hope Spencer (Annika Noelle) will watch Liam Spencer (Scott Clifton) as he steps up for Steffy Forrester (Jacqueline MacInnes Wood) and the girls. It’ll warm her heart to see the babies being taken care of, but it’ll also leave her saddened.

Hope just won’t be able to shake the feeling that she’s in the way. She’ll think Kelly Spencer (Zoe Pennington and Chloe Teperman) and “Phoebe Forrester” (Isabella de Armas and Redford Prindiville) have to come first, so she’ll sit Liam down and push him to reunite with Steffy. Hope will offer to take herself out of the picture and make the transition simple. She’ll truly feel like this is for the best.

Steffy will hear about this plan as well, so she’ll be concerned right along with Liam. They’ll realize Hope’s grief runs deeper than they thought. Liam will assure Hope that he loves her and wants to be with her, but she’ll insist that his family needs him. She’ll wish things would’ve worked out differently for them as a couple, but she’ll think a “Steam” reunion is the ideal outcome at this point.

Later, Liam will lean on Wyatt Spencer (Darin Brooks) for support. He’ll tell his brother about Hope’s plans for him and suggest he doesn’t know how to help her. Part of Liam may even wonder what it’d be like to reunite with Steffy and get their family back on track. Still, the part that loves Hope will worry about what that would do to her. It’ll be a big B&B mess for Liam to cope with.

Wyatt will offer some advice and hope a solution can be found. He’ll also take some time to celebrate with Sally Spectra (Courtney Hope). Spectra Fashions’ revival will leave both Sally and Wyatt excited about the road ahead. They’ll get flirty as they do some mock negotiations and prepare for any times where Bill Spencer (Don Diamont) might play hardball.

That preparation might come in handy once Bill drops a bomb! He’ll deliver some unexpected news about the company, so Wyatt and Sally will have to face the potential blow. Bill will show his softer side on this week’s new B&B episodes, February 25 – March 1. The Bold and the Beautiful spoilers say Katie Logan (Heather Tom) will be moved by Bill’s latest round of promises. He’ll make it clear that his family will come first from now on.

At The Bikini Bar, Zoe Buckingham (Kiara Barnes) will run into someone surprising and hit the roof. She’ll see Florence “Flo” Fulton (Katrina Bowden) and immediately rip into her for not leaving town. Zoe will push Flo to head back to Los Angeles, but The Bold and the Beautiful spoilers say Flo will stick around and serve up drinks instead.

Finally, Flo will eavesdrop on a brutal conversation between Hope and Katie. Once she overhears just how much heartbreak Hope’s dealing with, Flo could be tempted to crack! We’ll give you updates as other B&B details emerge. Stay tuned to the CBS soap and don’t forget to check CDL often for the latest Bold and the Beautiful spoilers, updates, and news.