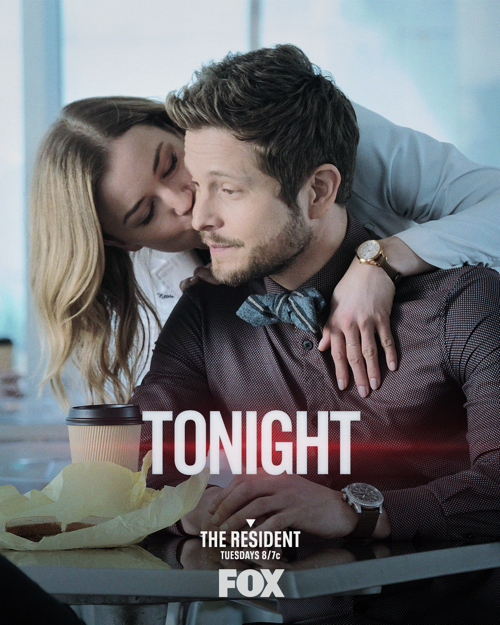 Tonight on FOX their new medical drama The Resident airs with an all-new Tuesday, December 17, 2019, episode and we have your The Resident recap below.  On tonight’s The Resident season 3 episode 10, “Whistleblower”  as per the FOX synopsis, “Conrad comes under fire when a former patient files a malpractice lawsuit against him, putting Bell in a difficult position with Red Rock.

When Devon discovers that his VIP patient has a life-threatening brain condition, the doctors ban together to perform risky surgery. Meanwhile, Mina discovers that Adaku has a dangerous heart condition that puts her and the baby at risk, and Kyle forms a personal relationship with a patient.”

The Resident season 3 episode 9 airs at 8 PM – 9 PM ET on FOX. Make sure to bookmark this spot and come back for our The Resident recap! While you wait for the recap make sure to check out all our television recaps, news, spoilers & more!

Mina‘s best friend calls. She is in line at a box store And thinks that she is in labor. She isn’t supposed to give birth for another five weeks. Mina tells her to sit and she’ll be right there.

Kit and Cain are in surgery in the OR. Their patient has increasing intracranial pressure. They are operating on him following a fall. He also has dementia. Kit tells Cain that when he comes out of surgery he will be a vegetable and that the humane thing to do is to let him pass away. Cain refuses to let anybody die in his OR.

Later, Cain forces one of the attendings to go out and tell the family that the gentleman came out of surgery and is stable although he is currently unconscious and intubated.

Conrad and Devon assess a teen boy in the ED that has mistakenly taken too much aspirin and sleeping pills according to his mom for a sports injury.

Cain meets with The daughter of a woman he performed surgery on who has yet to wake up. It was a risky surgery he should’ve never performed but looking for a good PR he did it anyway. She is still a vegetable but he asked that she be transferred to acute care.

Mina arrives at the ED with her best friend. Meanwhile, the woman being brought to acute care arrives and is placed next to several other patients on vents.

In the ED, the teen boy Tyler admits to Conrad and Devon and he tried to kill himself because his parents told him this morning that they were getting a divorce. Suddenly he becomes unconscious before waking again quickly while bleeding from the mouth.

Mina‘s best friend is admitted. Conrad and Devon discover their patient has liver failure and needs a transplant. Do you know if they share that Tyler tried to commit suicide he would be ruled ineligible? Devon thinks they need to erase that part from his file. Conrad is shocked, usually, Devon is all about the rules.

AJ looks over Mina’s friend. He tells her outside of the room that her best friend has mitral regurge, a defective heart valve that is causing blood to back up into her lungs. Mina wants to take her into surgery right away while AJ disagrees. They get into a dispute about what to do.

Bell confronts Cain about moving his patient to an acute care facility. He is well aware if Cain keeps his patient alive for 90 days on a vent he will no longer be tracked and it will not be counted in regards to the success rate of his surgeries. Cain defends himself by telling Bell that he just wants to make the family happy and give them hope for a little while longer.

Conrad meets with the transplant board and lies to them in regard to Tyler’s situation.

Bell tells Kit what Cain has Been up to. Meanwhile, Mina’s best friend goes into distress and is rushed to the OR. They take the baby out by C-section. Mina will not leave until she sees that her best friend is OK following heart surgery. AJ works his magic and returns her best friend to sinus rhythm. Mina is to close her up. AJ tells her he will forgive her for her bad attitude but he will not forget.

Mina goes to the rectory after to cry and pray. Taylor gets his liver and he quickly rushed to the OR.

Bell comes upon Cain’s resident performing a bypass. Blood goes everywhere. Bell intervenes and helps the resident get through the crisis. Bell gets word that Cain left the hospital. Bell confronts Cain later about leaving his patient wide open on the table. Cain reminds Bell of his previously failed surgeries. Bell reminds him he is his boss and now he is going to make him answer to the board.

Conrad buys Devon his last sandwich as an intern. Nic comes to tell them Mina’s best friend is still intubated and unconscious. Meanwhile, Mina watches over the baby who will go home with her if her friend doesn’t wake. AJ comes to see her and reminds her they did the right thing.

Tyler’s mother gets good news that his surgery went well. Conrad talks to Tyler about getting help when the head of the transplant is in the doorway. Conrad was unaware. He goes to Nic to tell her what happened. She is scared while he seems pretty calm.

Bell arrives to see Kim and Cain. They tell him he has been stripped of his title as chief of surgery. Bell tells Kit as he scrubs in for surgery that he won’t leave, he isn’t giving them the satisfaction.

Conrad is made the new chief resident. He is given the keys to his new office as everyone claps. When he goes to let himself into his office his card doesn’t work. Kim comes by and tells Conrad that he lied and he is fired. Conrad calls him out for the bad drug trial. Kim has him escorted out of the hospital.