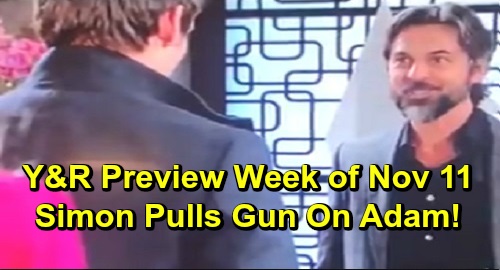 The Young and the Restless (Y&R) spoilers for the week of November 11-15 tease that we’ll see some intriguing introductions. For starters, Ashley Abbott (Eileen Davidson) will be back in town. She’ll return home to find her family dealing with plenty of Theo Vanderway (Tyler Johnson) drama, so she’ll get her opportunity to weigh in.

After Theo and Ashley meet, they’ll form a fast bond. Ashley will connect with Theo since they’re both tied to the Abbott clan – but not by blood. Theo’s swagger may even impress Ash since she often has some swagger herself. Ashley will think Theo’s ambition and skillset could be real assets. She’ll decide she wants Theo on her team, so she’ll invite him to come work for her in Paris.

Meanwhile, Amanda Sinclair (Mishael Morgan) will be stunned to see Phillip “Chance” Chancellor IV (Donny Boaz). Chance will assume Amanda must be his lawyer. It’s clear that Chance had no part in this will mess, so it’s time for some firm answers. Chance will be eager to nail down who really hired Amanda – and so will Devon Hamilton (Bryton James).

The Young and the Restless spoilers say Amanda will be forced to make some tough confessions. She’ll come clean and land in hot water, but at least Devon will get the truth. Phyllis Summers (Michelle Stafford) will also get wrapped up in this Chance turmoil. That makes sense considering Y&R buzz points to a Chance and Phyllis pairing eventually.

Over with Adam Newman (Mark Grossman), he’ll pack up a few of Connor Newman’s (Judah Mackey) things and prepare to head for Hope Wilson’s (Beth Toussaint) farm. At Chelsea Newman’s (Melissa Claire Egan) request, Adam will plan to take Connor there for a few days. Chelsea will be relieved since that means Simon Black (Jeffrey Vincent Parise) won’t be able to harm Connor. Unfortunately, her plan will go awry!

Adam will stop by the Grand Phoenix with Connor to say goodbye, but Simon will soon interrupt. Y&R’s newest villain will urge Chelsea’s ex to scram, but Adam will refuse. He’ll insist Simon will have to shoot him before he leaves this hotel without his family. The Young and the Restless preview video for next week shows Simon saying, “You want to be a hero? OK.”

Simon will reach for his gun, so this is sure to be a suspenseful showdown. We’ll give you updates as other news comes in. Stay tuned to the CBS soap and don’t forget to check CDL often for the latest Young and the Restless spoilers, updates and news.