The Young and the Restless Spoilers: Sharon Betrayed by Adam, Gets Her Heart Broken – Will Rey or Nick Be Willing to Pick Up the Pieces?

BY Heather Hughes on May 27, 2019 | Comments: 2 comments
Related : Soap Opera, Spoiler, Television, The Young and the Restless 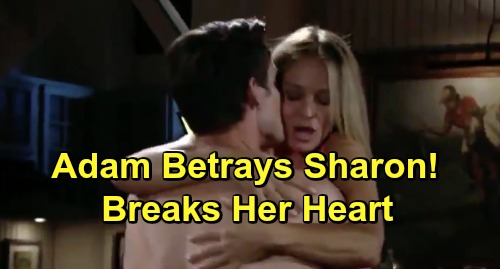 The Young and the Restless (Y&R) spoilers tease that Adam Newman (Mark Grossman) will work several angles to get what he wants. He’ll certainly take advantage of Victor Newman’s (Eric Braeden) desire to make amends. Victor is ignoring the obvious threat because he wants so desperately to repair his bond with Adam. That probably has a lot to with that hidden health issue he’s battling.

It looks like Adam may also team up with Phyllis Summers (Gina Tognoni) for some corporate chaos. Those two should make quite the dynamic duo. The only thing they’ll have to worry about is the possibility of turning against each other! However, there’s one person who might be the most crucial to Adam’s plan and that’s Sharon Newman (Sharon Case).

Sharon truly believes Adam can overcome his mistakes and become a better man. She trusts him more than anyone else in Genoa City, so Adam can definitely work with that. The Young and the Restless spoilers say Adam will seek Sharon out later this week. He’ll feel like she’s the only one she can rely, but she’ll undoubtedly express concern over the custody battle.

Even so, Adam might be able to get Sharon on his side. After all, Sharon had to give up Christian once upon a time. It was incredibly painful, but she came to understand that it was the right call. Now that Adam’s back and wants to claim Christian, he could convince Sharon that he needs to be with his son. This change in Sharon’s attitude wouldn’t happen overnight, but she could get there eventually.

That’s especially true since Sharon’s deep connection will grow – perhaps to the point of lust. A recent Y&R preview video shows Sharon and Adam hooking up, so that may be Sharon’s sex dream. Those returned feelings could lead to more trust in Adam, even when he doesn’t deserve it.

Adam may notice the vibe and play it up for selfish gain. He’ll do whatever it takes to get his family back – and that may include breaking Sharon’s heart. The Young and the Restless spoilers say Rey Rosales (Jordi Vilasuso) will accept the Dark Horse head of security job, but his main gig will be digging for Adam dirt. That’ll bring major tension between Sharon and Rey as well as Nick.

The Young and the Restless spoilers say Sharon will think Adam’s hands are clean. She’ll try to believe he’s just a man who wants his kids and a better life, but she may be mistaken. Some new details about Adam’s time outside of Genoa City will bring trouble later this summer.

How far will Adam push this with Sharon? Could he make her think they have a future together and then ditch her for Chelsea Newman (Melissa Claire Egan)? Will Rey or Nick be willing to pick up the broken pieces? We’ll give you updates as other Y&R news comes in. Stay tuned to the CBS soap and don’t forget to check CDL often for the latest Young and the Restless spoilers, updates, and news.