BY Heather Hughes on August 23, 2019 | Comments: one comment
Related : Soap Opera, Spoiler, Television, The Young and the Restless 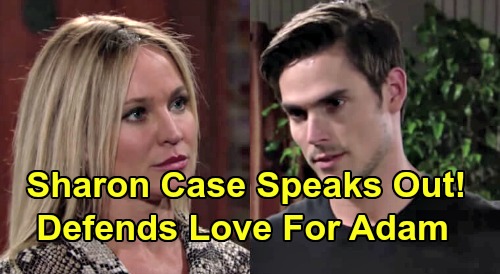 The Young and the Restless (Y&R) spoilers reveal that one CBS soap star is speaking out in defense of her character. Y&R fans know Sharon Newman (Sharon Case) has been pulled back into Adam Newman’s (Mark Grossman) orbit since he returned to town.

In fact, Sharon’s the reason Adam even came back to Genoa City at all. It’s doubtful amnesiac Adam would’ve made that decision without Sharon’s nudge.

Y&R has definitely been dangling this pairing in front of fans. They haven’t fully committed to them yet, but we got that “Shadam” sex fantasy along with a real-deal hookup later. Sharon has also been there for Adam emotionally and even received a marriage proposal from him recently.

As a result, Sharon Case has been receiving loads of messages – some of them angry, critical ones. Of course, we should point out that Case isn’t writing any of this. She’s just memorizing her scripts, showing up to work and doing her job. Still, Case certainly has an opinion on Sharon’s love life. She frequently retweets “Shadam”-related content and seems on board with where this could lead.

Some Young and the Restless viewers feel like Adam is causing Sharon to take steps backward. They feel Sharon is being weakened for the sake of the storyline. Case doesn’t agree, so she wanted to reassure everyone through a recent tweet.

“Thx 4all ur comments every1,” Case said. “Don’t worry, shes very strong, her love 4Adam doesn’t make her unstable. JMO they’ve both had tough pasts, they share that in common, they GET each other, help each other. Watch this week on #YR 2 see what happens!!”

Shadam Has Hot Chemistry – So Buckle Up And Hang On Tight

There’s no denying that Adam manipulates Sharon somewhat. Even so, many fans think they’ve got some hot chemistry. Complex relationships are often the most interesting ones on soaps. Easy-breezy romances aren’t very entertaining, so maybe we should just buckle up and hang on tight for this “Shadam” ride. It’s sure to come with plenty of twists and turns as well as starts and stops!

Sharon and Adam won’t be tying the knot anytime soon, but they’re not through with each other. No matter how hard Sharon tries to stay away, she always ends up drawn back to Adam.

Case’s support of the pairing itself is a good indicator of where things are headed. She’s privy to episodes that haven’t aired yet, so it makes sense for her to promote and defend “Shadam” if there’s more to come.