The Young and the Restless Spoilers: Which Coverup Crew Member Made the Biggest Mistake In the J.T. Case? 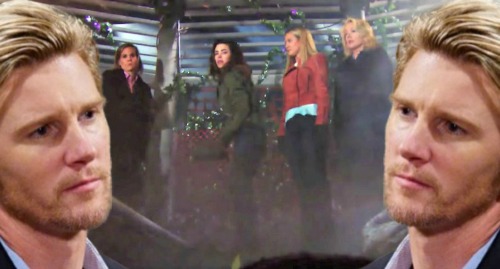 The Young and the Restless spoilers tease that the so-called coverup crew members must look inside themselves as the climax to the J.T. (Thad Luckinbill) trial happens. So, who in this group made the biggest mistake?

Luckinbill’s character was purposely written off the rails, which positioned J.T. as a deranged, irredeemable, one-dimensional villain. There really was only one true victim, that being Vickie (Amelia Heinle). On that plot point alone, no harm, no foul will mentioned about Heinle’s character within this digital space. But Nikki (Melody Thomas Scott), well, she’s an entirely different story.

Nikki’s fully instinctive and also heroic actions in stopping J.T. were necessary. All in the court now know about the fireplace poker, yet Nikki’s actions in that regard would never have been questioned as they are now if she’d only reported what she’d done to the authorities. It was a mistake that she enabled this legal mess.

But how about Phyllis (Gina Tognoni)? She thought purely of herself both then and when she reached the recent immunity deal with Christine (Lauralee Bell). By urging the coverup (her mistake), Phyllis manipulated the emotions of the other members of the invented group and then threw them to the wolves to save herself.

Sharon’s (Sharon Case) instincts were right. While in shock, like the other ladies, Sharon most strongly said that the authorities should be contacted. She then resisted covering up what happened for awhile until eventually rationalizing illegal secrecy. Her shift in thought was a mistake.

It would be lazy logic to believe that J.T. should be the sole target of condemnation. His choice to not get help led to the moment when he crossed moral and legal lines. But after he died (assuming that is true), the three cited ladies can also be legitimately questioned, which makes Christine’s actions in their regards right.

J.T. was Nikki’s accidental victim. She had three three witnesses to that fact. Vickie was in imminent danger when her mother, Sharon, and Phyllis burst into the bedroom. Nikki’s free will decision to hide what were admirable actions was fully misguided.

Phyllis reached back into her distant past, when she looked like Michelle Stafford. She chose to believe that Paul (Doug Davidson) and Christine would mine their grudge about the never prosecuted hit-and-run, where Phyllis purposely mowed them down. The combining of that situation with what happened on April 13, 2018 was a self-involved mistake.

Sharon wasn’t J.T.’s target, she didn’t hit him over the head, and doesn’t have the history with Chris, or Paul that Phyllis does. Her compassion for Vickie and Nikki overshadowed doing what was right, which Phyllis is seemingly incapable of doing. Sharon knew better, but still made a mistake.