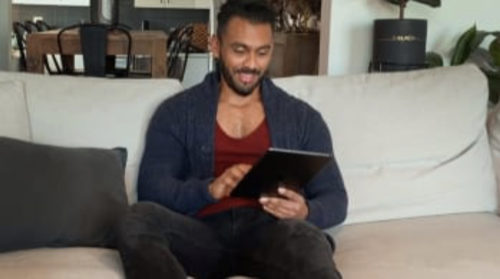 So make sure to tune in tonight between 9 PM – 10 PM ET for our 90 Day Fiance: Before the 90 Days, B90 Strikes Back! recap.  While you wait for our recap make sure to check out all our television spoilers, news, recaps, and more, here!

There were warning signs all along, but it wasn’t until the private investigator said it that Yolanda finally realized the Williams wasn’t real and Yolanda has since moved on. She’s open to dating other men. Preferably real ones this time and meanwhile David was revealing some truths as well. He said his relationship with Lana did not work out. He and Lana were exchanging emails once a week now and so he thought it was sad that they weren’t really together anymore. They only met in person once. They had a few days together that David was counting as part of his relationship and so is it really that surprising the relationship didn’t work out?

The cast of “Before the 90 Days” came together to rewatch the Tell All. The Tell-All probably held the most dramatic moments throughout the whole season and so living it was tough while watching it over was even tougher. This was the episode after the breakups. This happened after all the fights and some of the cast members were still feeling bitter. Take Ash and Avery for example. The Tell All was where they went in-depth about they were no longer together and rewatching the moment they got into an argument seemed pretty laughable now. It wasn’t at the time. Back then, they all took it and themselves so seriously that didn’t seem the humor in it.

Ash and Avery got into a fight about everything. They argued about him deleting photos from Instagram. They argued about her wanting a break a few days after telling him she loves and that she wants to marry him. They also argued because Ash promised to do a diet with her which he later ignored. The last one was truly ridiculous and the Pillow Talkers couldn’t help laughing at it. They thought that was such a childish thing to complain about. They said everyone breaks a diet and they were right. It seemed ridiculous that Avery would hold Ash to a higher standard when it wasn’t even his diet. It was hers.

Then there was the scammer talk. The Tell All was the moment in which Yolanda met her fellow cast member David for the first and surprisingly they did not talk about their similar situations. No, what happened is that David tried to give Yolanda advice. He tried to tell her that she was being scammed and it was funny coming from him because he admitted to spending almost half a million dollars on Lana. This was before he even met her. He was sending her money and gifts and paying to just talk to her. It was so laughable that someone in his situation would think to advise Yolanda that Yolanda mentioned it.

Yolanda said David is the last person who should talk to her about dating a scammer. There was also more. There was the moment in which Rose accused Ed of propositioning her for money and she claims she turned him down. At the time of this accusation, all Ed could do was laugh. He said that never happened and that he had to laugh because it came so out of the left field. Ed and Rose disagree during filming and they disagree now. Rose is still adamant that Ed that asked her to film herself in exchange for money. She has never backed down on those claims and she isn’t laughing. She called Ed despicable back then and its clears she still believes that.

There was also the drama between Stephanie and Erika. Their friends being there for that episode also didn’t help because the friends all chimed in with an opinion and so that made the drama worse. Only looking back, Stephanie and Erika weren’t as angry as before. They found the humor in the things they’ve said and done. Erika also said the way that Stephanie dismissed her at the Tell All was now a thing with her friends. They would now all tell her bye that same way because it was just that humorous for them. They made Stephanie a meme for their group. They also helped change Erika’s mind about everything that went down.

Erika had been livid at the Tell All. She was so upset at the time that it’s good she’s on the other side of this now and so was Stephanie. Stephanie wasn’t at all angry or resentful as she rewatched the episode. She like everyone else had gotten caught up in what happened with Tom. Tom sent hooks out and he tried to pick up other women on the cast. He snuck into Avery’s DMs. He told her that he was single and so she “yes” then she said “no”. Avery was trying to work things out with Ash at the time and she didn’t like how Tom then tattled on her to Ash. And Tom also made a move on Stephanie.

Tom was single. David said he was single yet he still refuses to hear a word against Lana and that included the Tell All. His fellow cast members had thought Lana was a scam artist. They tried to warn David and he refused to listen to them because he got engaged. The others broke up while he got engaged.