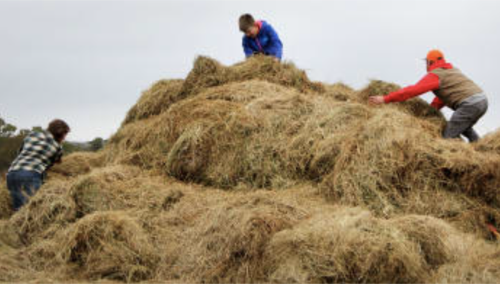 Tonight on TLC their reality show Counting On airs with an all-new Monday, July 28, 2020, season 11 episode 4 and we have your Counting On recap below.  On tonight’s Counting On season 11 episode 4 “The Dugger Dash,” as per the TLC synopsis, “It’s hard to decide which Duggar is the most competitive, so they decide to put it to a test. The family splits into four teams and Michelle sends them on an exciting race around town.”

The family had so much fun at the corn maze that Michelle had this idea to take it up a notch. Michelle put together a family fun competition called the Duggar Dash and the Duggar Dash is going to be a race all over town. Michelle was going to stay behind to watch the younger kids. Only the kids ten and above were going to be participating in the competition. The competition also required teams. Michelle created teams using various family members and they had to elect amongst themselves which person would be participating in which challenge. And the first challenge was going to be eating a mystery food item.

First, the team had to select a representative. The representative then had to play musical chairs and, rather than chairs, they would land on color squares. Their squares would determine what they eat. There were four selections. There were cricket tacos, escargot, tatter tots casserole, and Haggis. The first person to finish the challenge was Ben. Ben ate the escargot and it wasn’t his first time. He had it in Paris on his honeymoon. He said back then it had tasted really good. This time the texture was all off and it definitely felt like he was eating snail. He still finished first. His team which was the Yellow Team was then on their way to the next challenge.

Back at the mystery food challenge, the two stranglers were the people that got caught eating the haggis and the cricket tacos. Jim Bob finished last with the cricket tacos. He was lucky because his team wasn’t a competitive sort. They weren’t like Ben and Jessa or Austin and Joy. Austin and Joy and their team was in second place when Ben and Jessa’s team had to stop for a bathroom break. It seems didn’t account for that back at the house. They, therefore, had to stop at a nearby gas station and that cut into their time. The Green Team took the lead. They like everyone else got caught driving the new speed limit in that area.

The new speed limit cuts into everyone’s time. The Green Team wasn’t the first to arrive at the store for the second and yet they were the first to leave. The second challenge was that each team had to buy a color of their team color and wear it. They also had to stay within budget. They were only five dollars and so it’s a good thing they were all going to a really good thrift store. The store had some great deals The Green Team eve managed to cut some corners here by purchasing one item and cutting it up so that they were all wearing green. The Yellow Team decided to be more creative by getting hats as well wigs to wear.

The Blue Team was in third with Jana leading the way. Her team got hair scrunchies and that way they each had one. The Red Team was in last. They were also having problems with finding things that had red in it and stayed within budget. They were still figuring out their outfits as everyone else raced to the third challenge. The third challenge was to complete a climbing wall. Which out great for the Green Team. Their representative for the challenge had just done the same exercise several days ago and so he was finishing upright as the Yellow and Blue Teams were coming in. The Green Team maintained their lead.

The Blue and Yellow teams were neck and neck for second place. They started the wall at the same time and the Blue Team just won by a smidge. They were all racing to the fourth challenge as once again the Red Team was just showing up. The Red Team remained in the last place. The other teams all raced back to the house for the fourth challenge. The fourth challenge was Duggar math. They were each given math problems based on their knowledge of the Duggar Family and once they figured out the number they next had to find shoes in the number in the gazebo. The team that found the right shoes would go to Michelle with the right number. Then and only then will be given the clue to the next challenge.

The Yellow Team was in the lead. They got the Duggar math correct and so they found out the fifth challenge was most difficult. They had to find their clue in a haystack. They saw their friend was doing yard work with a big machine and they had asked him to move the haystack with the machine. Unfortunately, this made things worse not better because previously the clues were only an arm’s length and now they were all over the place. It wasn’t until someone kicked off some hay that they finally found their clue. It just wasn’t the Green. The Yellow Team found their clue first and they went back to the big house first. They, therefore, won the competition.

Coming in second place was the Green Team. They eventually found theirs after a lot of looking and Austin later helped another team found theirs. He helped the Red Team and they were able to come in third. The Blue Team hadn’t been able to find theirs at all. So, they were in last and they received a ribbon that said “Honorable Mention”. The Yellow Team was given a trophy. A trophy they were very proud of and in other good news, Kendra’s contractions began while she was looking through the haystack.

And so another Duggar baby is on the way.