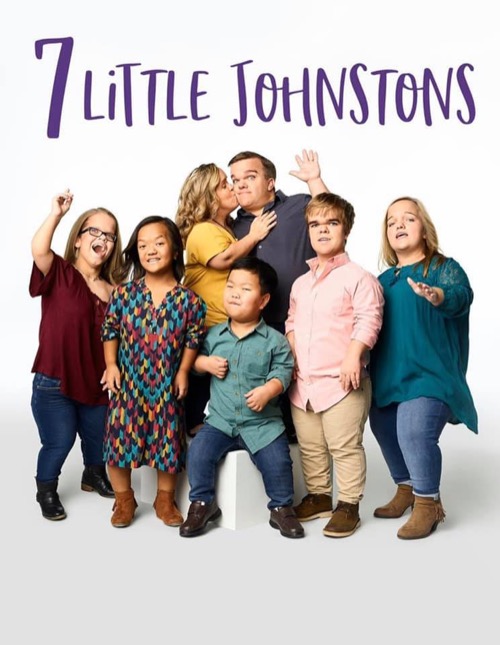 Tonight on TLC America’s largest know little family, 7 Little Johnstons returns with an all-new Tuesday, April 7, 2020, episode and we have your 7 Little Johnsons recap below. On tonight’s 7 Little Johnsons Season 5 Episode 2 “Anna Ate My Homework,” as per the TLC synopsis, “The Johnstons pamper themselves with mud masks before getting down and dirty at a princess-themed mud run. Jonah gives Trent and Amber some devastating news and Trent receives the results from his gallbladder scan.”

So make sure to bookmark this spot and come back from 10 PM – 11 PM ET! for our 7 Little Johnsons recap. While you wait for the recap make sure to check out all our television recaps, spoilers, news & more, right here!

Summer is here, Amber and the girls have signed up for the Princess Mud Run. Elizabeth thinks it will be a good idea to make mud masks to get in the spirit before the run. The first one to get the mask put on her is Emma. Elizabeth tries to do one on Trent, he is not in it, but puts on a shower cap and goes for it. Trent thinks it stinks, he thought it would at least smell good. Amber gets on a shower cap, Trent says he wants to do hers. Alex is not into it, Emma thinks it looks like poop on your face. Trent gets Amber back for that time when she waxed his eyebrows. Trent says she looks like she has cat vomit on her face.

Trent tells Amber he heard that she is doing the mud run, she says yes, it is an opportunity to boost confidence, it empowers women. Amber says she will be fine, the men in her house are more the princesses than the women. All she wants is for them to be there to support the girls. Trent is still having issues with the right side of his abdomen, he just completed a scan for his gall bladder. He is hoping that the results will give him answers and fix this problem. Anna is not thrilled to be going to college, she doesn’t understand why she has to leave home, there are other ways where she can be independent. Amber wants her to go and so does Trent, they think it will be good for her and for them.

The next morning, Jonah’s grades came in, he did do well in math and he was asked to leave the campus. Trent says that procrastination and laziness creates a lifestyle and sets a tone for the rest of your life. Trent doesn’t think that Jonah is just struggling academically. Trent tells Jonah that he should be setting a good example for Alex, he is lazy around the house and that needs to change.

Trent tells Jonah that he has done what he has been told to time and time again. Amber says the rules apply for everyone. Jonah asks how many times have they worked with Anna, and they don’t really work with him. Amber doesn’t really have the answers and it makes her upset. Jonah says he has a lot on his plate and it is not fair to him. His parents punished Anna and said she couldn’t drive, and they made Jonah drive her, so he feels like he was punished as well.

Amber tells Jonah that he needs to open up and let things go, and he needs to do that before they even consider a new school. Amber thinks this is a blessing, now they are able to see that Jonah needs help and it’s a matter of him not knowing what to do and that is a cry for help. Trent tells him that they need to get a plan for him.

On top of all this, there is a lot of anger and animosity built up between Anna and Jonah. Amber tells Trent that she sees the anger build and build with Jonah and she wants the two of them to work with him on that. Amber says she never thought she would have children who didn’t want to be around each other and it makes her sad. She doesn’t have the answers and she doesn’t know how to fix this.

The mud run is nineteen obstacle course that can deal with mud, climbing, sliding, crawling, all with mud. The girls are making T-shirts for the run. Amber asks Trent and Alex if they want knight and prince T-shirts. Alex says he wants one that says king because he is the king. Then Alex reminds Amber not to hug him in public. Emma’s shirt says “race you to the castle.” Trent’s T-shirt says, “big daddy princess protector.”

The doctor’s office calls Trent, they have the results of his scan, nothing is wrong, no concerns from the radiologist. Trent is aggravated entirely, they are actually back to square one. Trent says the worst thing is the worry, what is it. Amber wants to try to figure it out before there is another emergency issue. It’s five months, they just want to figure out what the answer is.

The next day, it is time for the Muddy Princess mud run. It is 3.2 miles of mud and obstacles. The women are all dressed up, and so are the men, Jonah thinks they all look ridiculous. Anna thinks it is cool, she loves the mud. The obstacles are LP friendly, everyone can do most of them. Elizabeth found that the mud wall was the most challenging. Everyone completes the race, they had lots of fun. Nobody feels like a princess, even with their crowns and tutus on.