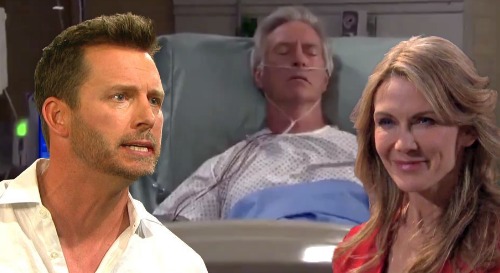 Days of Our Lives (DOOL) spoilers tease that Marlena Evans (Deidre Hall) will hold out hope that John Black (Drake Hogestyn) will pull through his latest medical crisis. John clearly just had a setback – and things will likely look bleaker than ever soon.

Marlena won’t want to leave John’s side as she waits for more news, but someone will ultimately join her by John’s hospital bed.

On August 31, Brady Black (Eric Martsolf) will return to Salem. Days fans know Brady’s been on the run with Kristen DiMera (Stacy Haiduk), but he’ll apparently hear about John’s crisis and come home.

How could Brady stay away when his dad’s in such dire condition? Brady will want to be near John and his other family members so he can offer support.

Marlena will undoubtedly love this pleasant DOOL surprise. She’ll wish they were reuniting under better circumstances, but at least they’ll be able to come together over John’s situation.

Brady will be sorry he couldn’t make it back sooner, but Marlena surely won’t blame him. No one could’ve predicted seemingly healthy John would wind up in this predicament.

After Brady gets updates on John’s condition, Marlena may want the scoop on where Brady’s been! Will Brady confide about his adventures with Kristen and Rachel DiMera Black?

Brady’s usually pretty good about opening up to Marlena, so he may admit the “Bristen” family has been having a blast – at least until this terrible blow happened.

As for Kristen, Days of Our Lives spoilers say she’ll also make it back to town on September 3. Does that mean Brady will go before Kristen so he can try to secure her freedom?

That plan didn’t work out very well last time, but Brady might’ve done a bit more brainstorming. There might be another strategy that Kristen and Brady can try.

However, it’s also possible that Kristen will go against Brady’s wishes and refuse to stay away. Kristen might find a reason to sneak back in Salem and put everything on the line. Regardless, Days of Our Lives spoilers say Kristen will be right behind Brady.

It looks like Brady will end up sticking around, but how long can Kristen linger without getting caught? Kristen will either have to lock in a deal, flee again or risk getting arrested, so we’ll see how it all goes down.

Days spoilers say Brady and Kristen will shake up Salem, so stay tuned to DOOL! CDL’s your top source for scorching Days of Our Lives spoilers, updates and news, so be sure to visit us often.